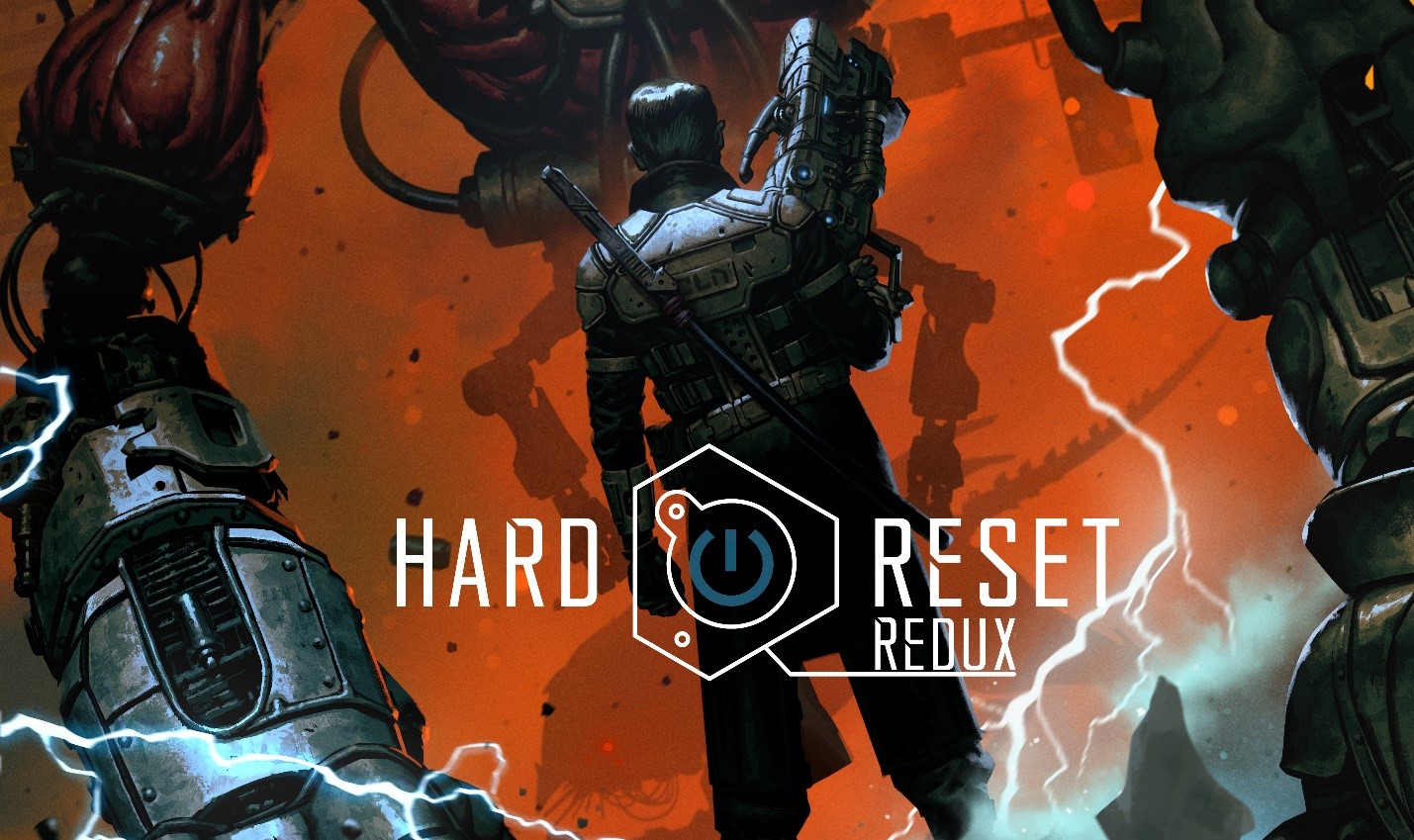 In setting up my review of Hard Reset Redux, it should be noted that first person shooters tend to fall into one of three categories. Everything began with the more arcade-y shooters, which featured game play that was based around shooting just about anything that moved, such as in id Software’s original Doom title in way back in 1993, and its successor, 1996’s Quake.

Meanwhile, seemingly as a reaction to these more hyper-action oriented shooters, tactical shooters and stealth action games featuring such things as limited ammo, realistic ammo and equipment pick-ups and usage, and cover systems, were gathering steam, such as in 1999’s Winback, 1998’s Metal Gear Solid, as well as many of the early Tom Clancy series of games (Splinter Cell, Ghost Recon, et cetera). 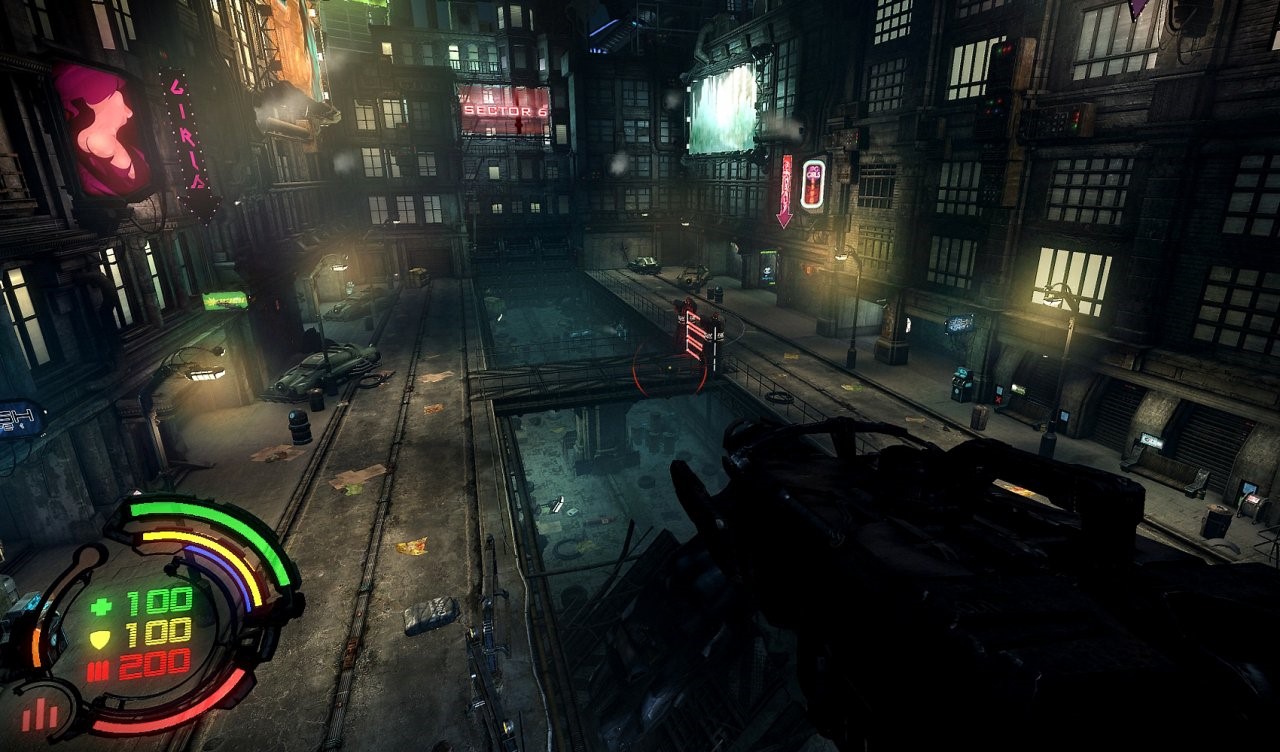 A third type of shooter also gained prominence a little while after the first two, and was characterized by offering larger-scale warfare with different types of vehicles which players could utilize, such as 2001’s Tribes 2, and EA’s classic Battlefield 1942 title. These games came with larger, more expansive battlefields and usually required some sort of vehicular transportation to traverse across, lest a player’s in-game avatar end up spending many minutes of game time plodding across them.

In more recent times, seemingly going along with the whole “hipster” trend of indulging in everything retro related, games featuring 80s style pixilated graphics have been spawning like tribbles (from that long ago Star Trek episode, The Trouble with Tribbles). Concurrent with this rather banal development (I’m not a fan), old school first person shooters have once again become chic, mainly spearheaded by the most recent Battlefield and Call of Duty offerings, as well as Counter-Strike: Global Offensive and the 2016’s reboot of the original Doom.

Understandably, many upstart and indie developers have attempted to get in on this virulent retro frenzy. Within the first person shooter realm, developer Flying Wild Hog has offered its own take on the classic arcade first person shooter, originally with their 2011 effort, Hard Reset, and its subsequent free expansion, Hard Reset: Exile, which later became bundled together as the Extended Edition. 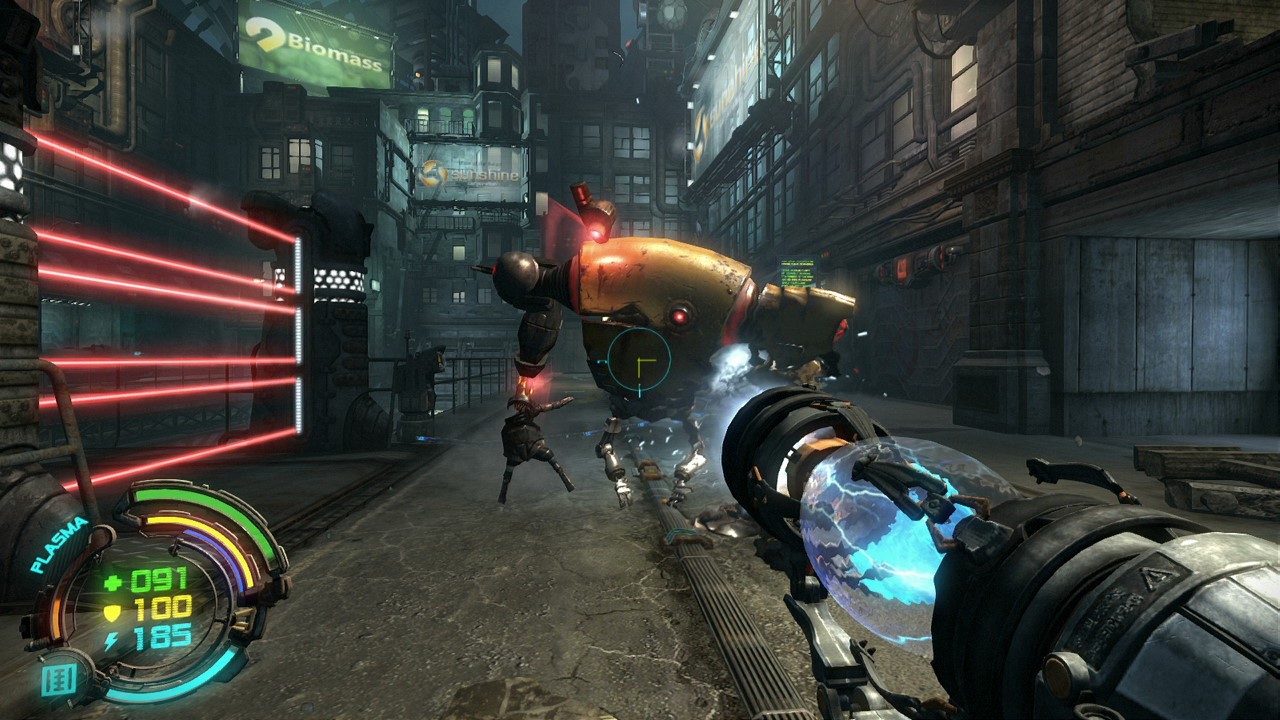 Fast forward to 2016, a year in which many re-releases and the cleverly worded “remastered” versions of games are all the rage. Flying Wild Hog apparently decided to offer a “redux” version of the Hard Reset: Extended Edition, titled Hard Reset Redux, would be a good idea, and this is what Redux has to offer…

Hard Reset Redux is set in a dreary cyberpunk universe, chock full of boilerplate dystopian themes such as an evil, monolithic entity known simply as “The Corporation” (really guys?). The narrative is rather derivative of other genre staples and really doesn’t stand out enough to be worthy of mention. Let’s just say that it’s a hodgepodge of evil AI entities, humans experimenting with AIs, human-looking super robots, and something about saving a master network from going down, lest billions of humans die. Yeah.

To its credit, Hard Reset, just like its straightforward, action-heavy forbears, Serious Sam, Painkiller, and Doom, was never really interested in telling a compelling and unique story. And to this end it has succeeded. Hard Reset Redux doesn’t expand on the threadbare narrative offerings of the original game—instead it wades into familiar territory and evokes the same fast-twitch, kill-everything-that-moves gameplay that made it semi-popular back in 2011. If it ain’t broke… 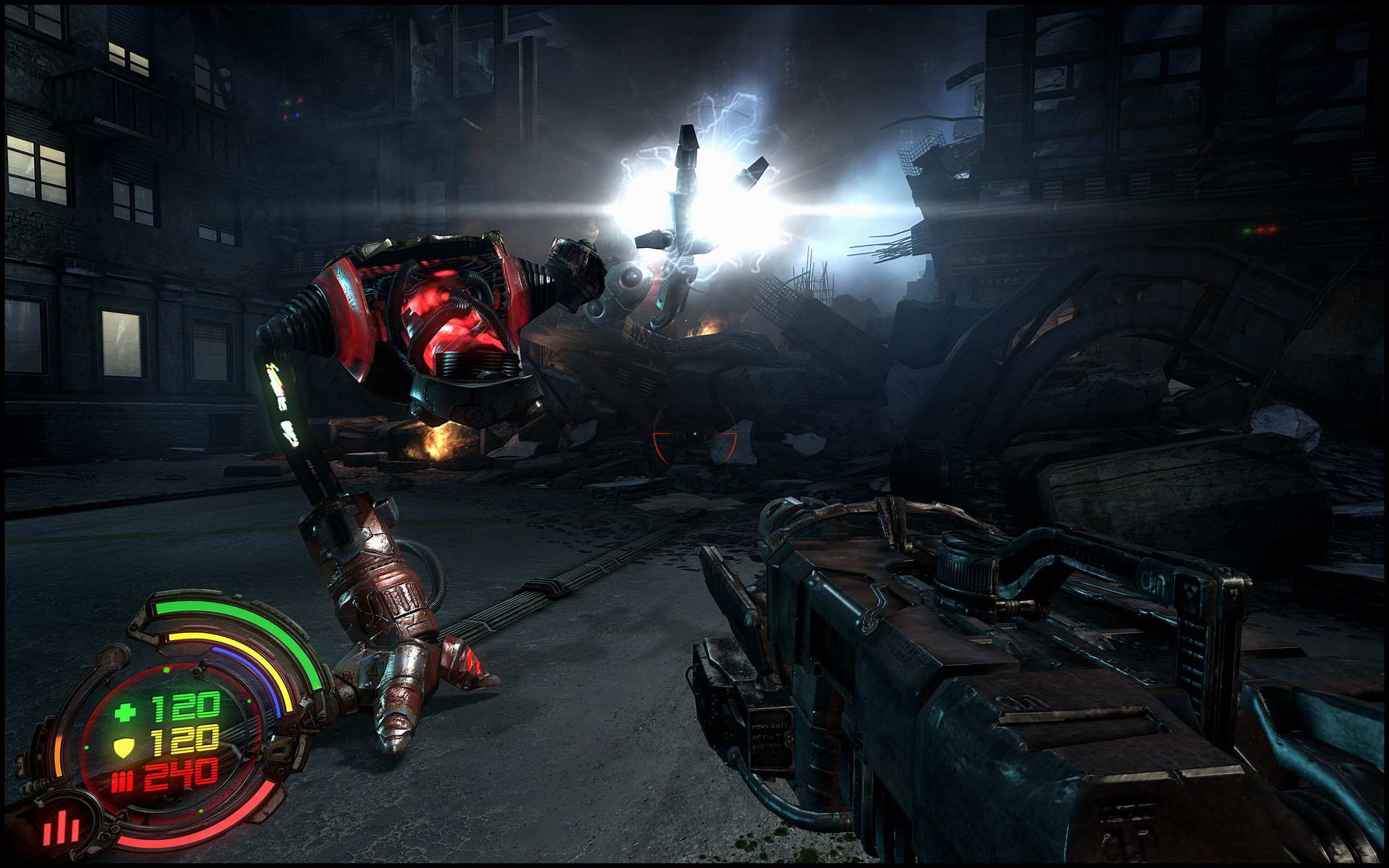 The Redux version seamlessly combines the Expanded version so that it doesn’t seem as tacked on. That entails including the Expanded’s Survival mode, five new maps, and four new enemies. Redux offers updated enemy placement, re-balanced pacing, and one new enemy type called the Cyber Zombie. To me, the game still moves at a fast-and-furious, breakneck pace that saw my avatar running from kill zone to kill zone, blasting away at various types of enemies. These include a very limited variety of small, medium, and large robotic and semi-organic adversaries. The big ones lumber around and the smaller ones tend to be swarmy. If you’ve played any of the more action (story-lite) games previously mentioned, you’ve seen it all before with Hard Reset Redux.

Just as with Doom, many kill zones contain secret areas that you can find various power-ups, and big glowing ammo and weapon pick-ups, in. Fans of constant, unadulterated action will also be pleased to learn that your character’s ammo can recharge if given a few moments, so there is hardly ever more than a few seconds as far as breaks in the firefights are concerned. There are also ample opportunities to blow things up and create multitudes of big orange fireballs, since each kill zone is littered with explosive red barrels which deliver splash-damage to your foes. There are also electrical objects that you can shoot, which zap any nearby enemies and slow them down a bit. Those who like their action a little more up close and personal will have a blast utilizing Hard Reset Redux’s dash mechanic, which allows you to zig zag around enemies and quickly slice and dice them with your Cyber Katana. 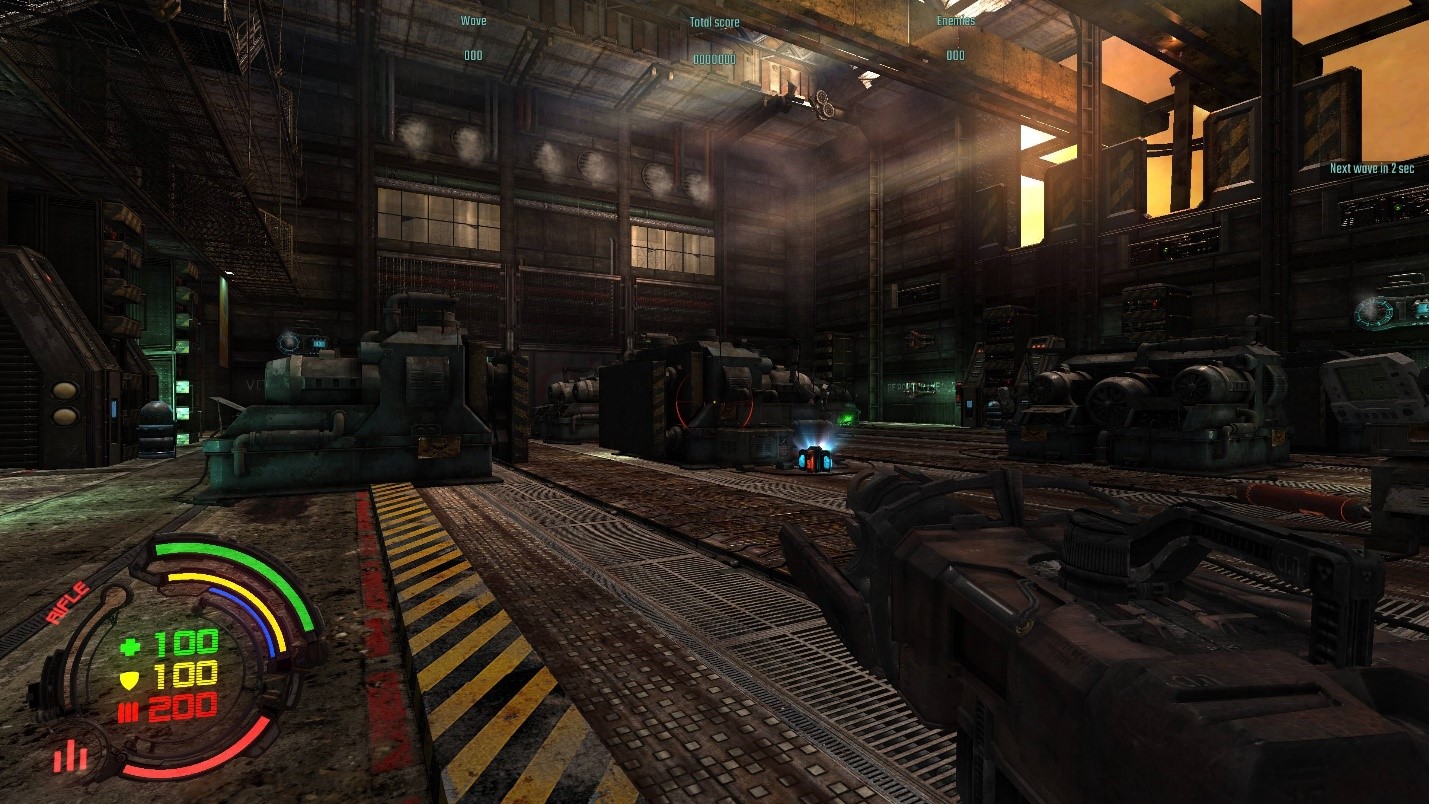 Visually, Hard Reset Redux is a mixed bag. Surely, it is technically sound and I experienced hardly any lag whatsoever while playing it, even when big swarms of enemies crammed my gaming laptop’s screen. It features some highly-detailed textures right alongside ones that are rather dull, making for uneven looking environments, quality-wise. The environments themselves are pretty generic Blade Runner fare, with a limited, drab color palette, perpetual darkness and rain, and flashing on-and-off corridors replete with exposed wires and “zzz..zzzz!” sounds. The weapons and particle effects are well handled, however, and you can tell that this is where the developers concentrated a large portion of their time and budget. Blasting large swaths through blobs of enemies will definitely appeal to the more hyper-action oriented gamers out there. In short, this game will definitely impress your friends on a beefed up gaming laptop.

Overall, I found Hard Reset Redux to be a serviceable high-action shooter, which doesn’t try to pretend that it’s anything else than what it is—a fun arcade first person shooter romp that features straight-ahead action, and harkens back to the glory days of Doom and the plethora of games that it inspired. If you’re a lover of lots of action and tons of orange fireballs, you just might enjoy Hard Reset Redux.