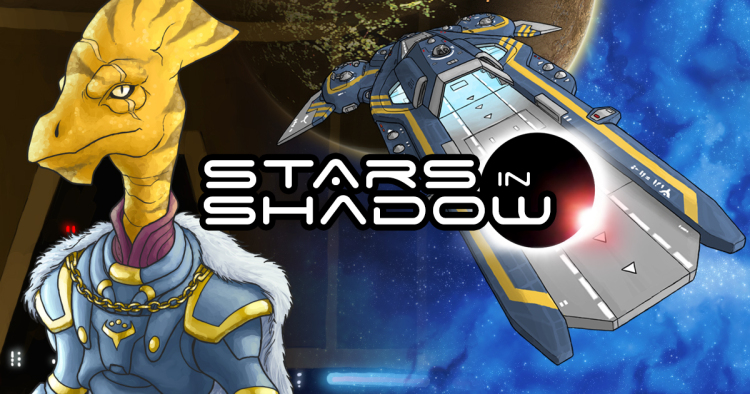 I think that many gaming developers have been interested in exploring the final frontier for some time now—that is to say, the expansive vacuum of space. However, we’ve all been caught up in a huge survival game glut for some time now. Especially post-apocalyptic survival games. It seems that every time you turn around, another batch of indie survival games has hatched, each with the hopes of grabbing a piece of the ever-diminishing pie that has been rapidly devoured by games like Rust, Day Z, and H1Z1.

However, recent developments in computing power and technology have made it possible for even small indie game developers, to produce games set in space. The post-apocalyptic setting is still getting tons of play, but new science fiction survival games, such as Empyrion – Galactic Survival, Osiris: New Dawn, and others, are now stepping forth into the limelight. 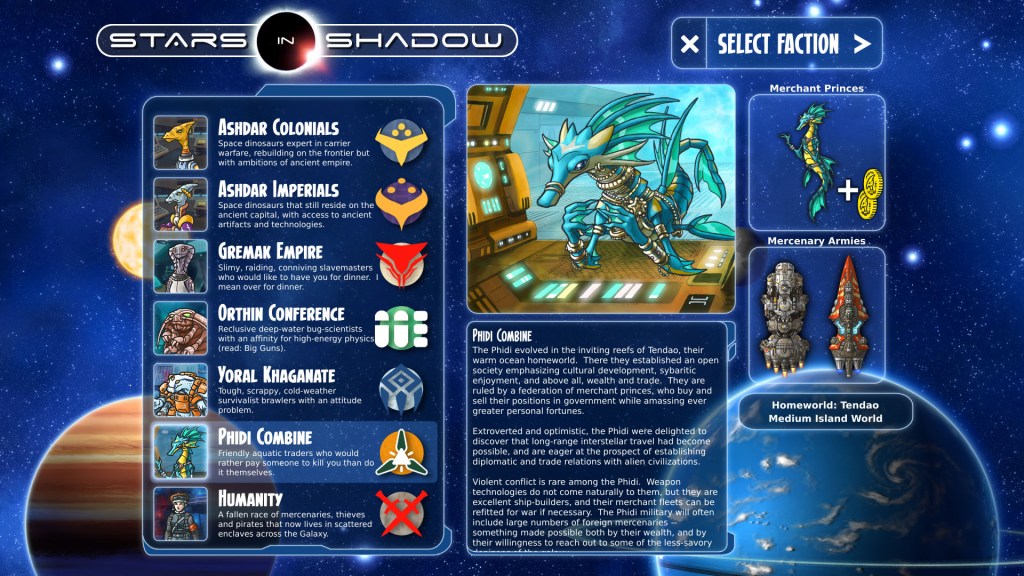 Likewise, this same trend seems to have rekindled interest in science fiction 4X strategy games as well—which is more than fine by me. Throughout my geeky gaming years, I’ve lost many an hour to space-based 4X games, from the classic Master of Orion 2, to Sins of a Solar Empire, on up to the incredible Stellaris. Whereas other games seemed to have (rather blatantly) copied Stellaris’ formula (*ahem – Dawn of Andromeda *cough), in my opinion, others have sought to capture the good old turn-based magic of yore.

I first noticed Stars in Shadow on the Steam Store. It had a wonky yet charming art style that set it apart from the usual, more serious-looking science fiction games out there. When I received my review copy of the game, I fired up my beefy gaming laptop, downloaded it, and tried it out. Although I still liked the art style, I was a little underwhelmed by the lack of content on hand. So, I promptly uninstalled it and pretty much forgot about it.

Just a few days ago, I haphazardly read somewhere that Stars in Shadow would be releasing on January 19, 2017. I then went to the game’s store page and checked out some of the more recent reviews. People were giving it high praise, with some saying that it strongly reminded them of MOO2. Needless to say, I suddenly got the urge to reinstall it (I’m a huge MOO2 nut) and try it once again. 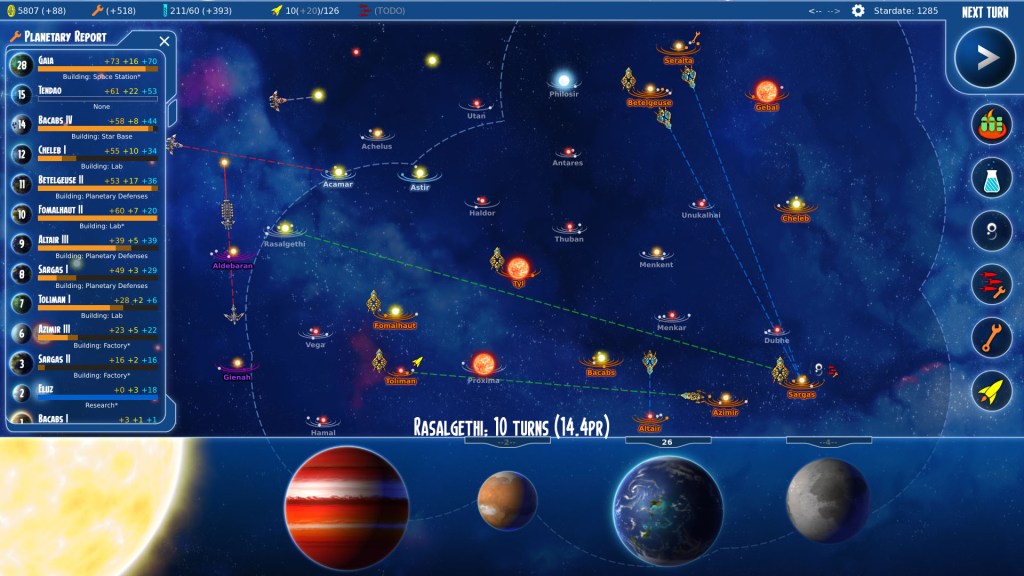 The first thing that I noticed is that the menus looked cleaner and much more organized than before. Then, I saw that there were also more options to choose from. After selecting my race (there are seven to pick from), the Ashdar Colonials, I defined the games parameters, such as the map size, number of star systems, frequency of native races and habitable planets, and so forth, and started a game up. The Ashdar Colonials, by the way, are a race of space dinosaurs that favor carrier warfare.

I began with a scout cruiser, a colony ship, and a transport vessel, and of course, my home planet, which was a large garden world. The beginning phase was tough—I lost all of my ships in just a few turns after running into space pirates who were orbiting neighboring planets. I quickly boosted my economy by building mines and markets, and researched fiscal technology as best I could. My efforts payed off, and soon I’d rebuilt my fledgling fleet back up to par. Soon thereafter, I settled a couple of colonies on nearby planets and began the arduous process of building them up to speed.

Soon, I encountered my first alien contact, a gruff race of three-eyed, snow-loving space bears called the Yoral Khaganate. To my surprise, the Yoral were friendly and agreeable to me, and we fast became space buddies. I was able to quickly set up trade and research deals with them, and soon after that, a bona fide alliance. As the game progressed, while I was busy fighting pirates, the Yoral became embroiled in a two-pronged war—one with a large faction of dangerous space mercenaries, and the other against a friendly (although sometimes devious) race of traders called the Phidi Combine. By then, the Yoral had blossomed into a pretty powerful civilization, with many fleets abroad. One of the things that I really enjoy about the Stars in Shadow was that it gives you the opportunity to watch each space battle, even ones that don’t involve you. In this regard, I got to behold each of the Yoral’s space battles, which were just plain fun to watch.

Stars in Shadow’s combat system is decidedly MOO2-esque, which is just fine by me. Combat is turn-based, with each side maneuvering their ships into strategic positions, and then firing their various weapons systems at one another. If there were any criticisms, they would be that I wish that each ship had its own turn, regardless of which side it was on. In other words, an initiative system such as featured in Battle Brothers, where each combatant has its own precedence of action, allowing for a back and forth flow of combat between the two sides—instead of one side taking their entire turn, and then the other taking theirs. I’d also have loved to have seen different components within ships being able to take damage or even be destroyed outright, depending on how much damage they’d taken. It would have been more immersive to see things like shield generators getting blown out or failing, and sensors being destroyed. The only thing that I’ve noticed in battles is that a ship’s reactor core can get hit, thus blowing up the entire ship wrapped around it. 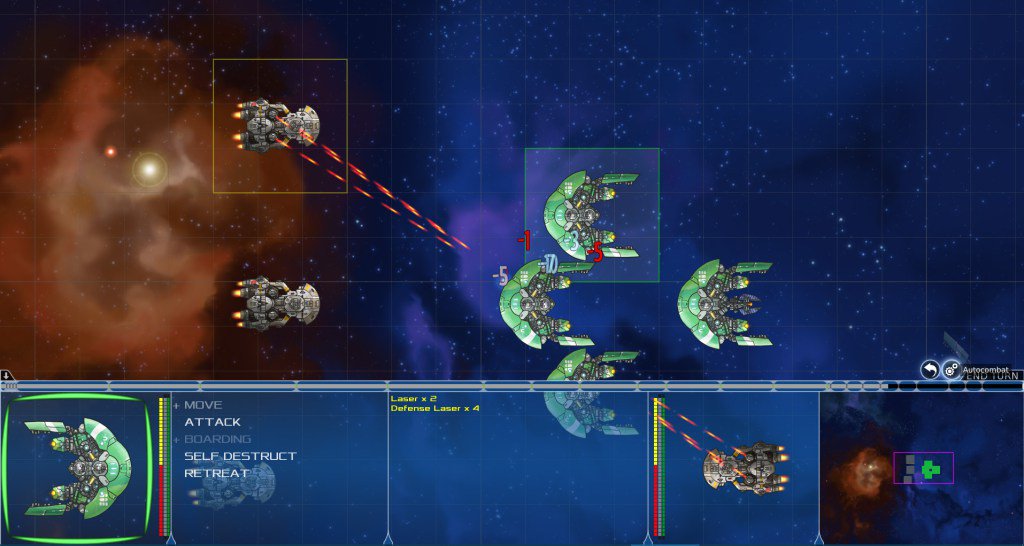 On the galactic, empire management screen, Stars in Shadow is pretty much played as you would any other science fiction 4X conquest game. You slowly build your empire up by researching new technologies, developing your infrastructures, and colonizing new worlds. Building a decent naval force, of course, is also of primary import. After all, who likes being overrun by nasty bands of scurrilous pirates, or cantankerous alien empires? Stars in Shadow is a single player only affair, so after you take your turn, all of the AI factions take theirs.

Stars in Shadow has definitely come a long way in just a few short months. It offers a unique art style, classic MMO2-like, turn-based goodness, lots of different aliens as well as varied ships and equipment types, and a fun (if perhaps a little too brisk) pace. I’ll definitely be looking out for the full version, which is set to be released in just one week. But until then, I’ll just be happy to expand the borders of my inquisitive space dinosaurs. 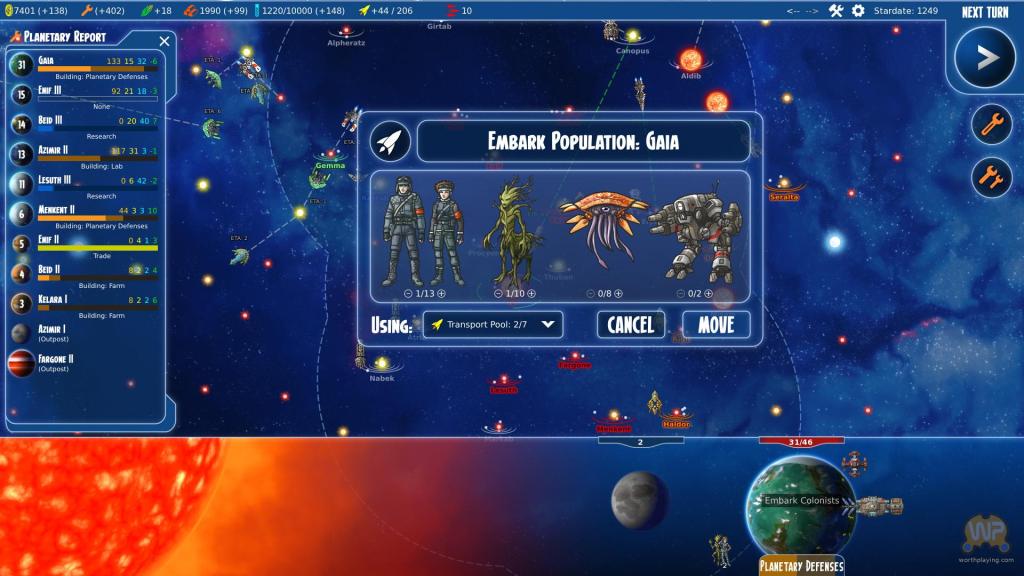