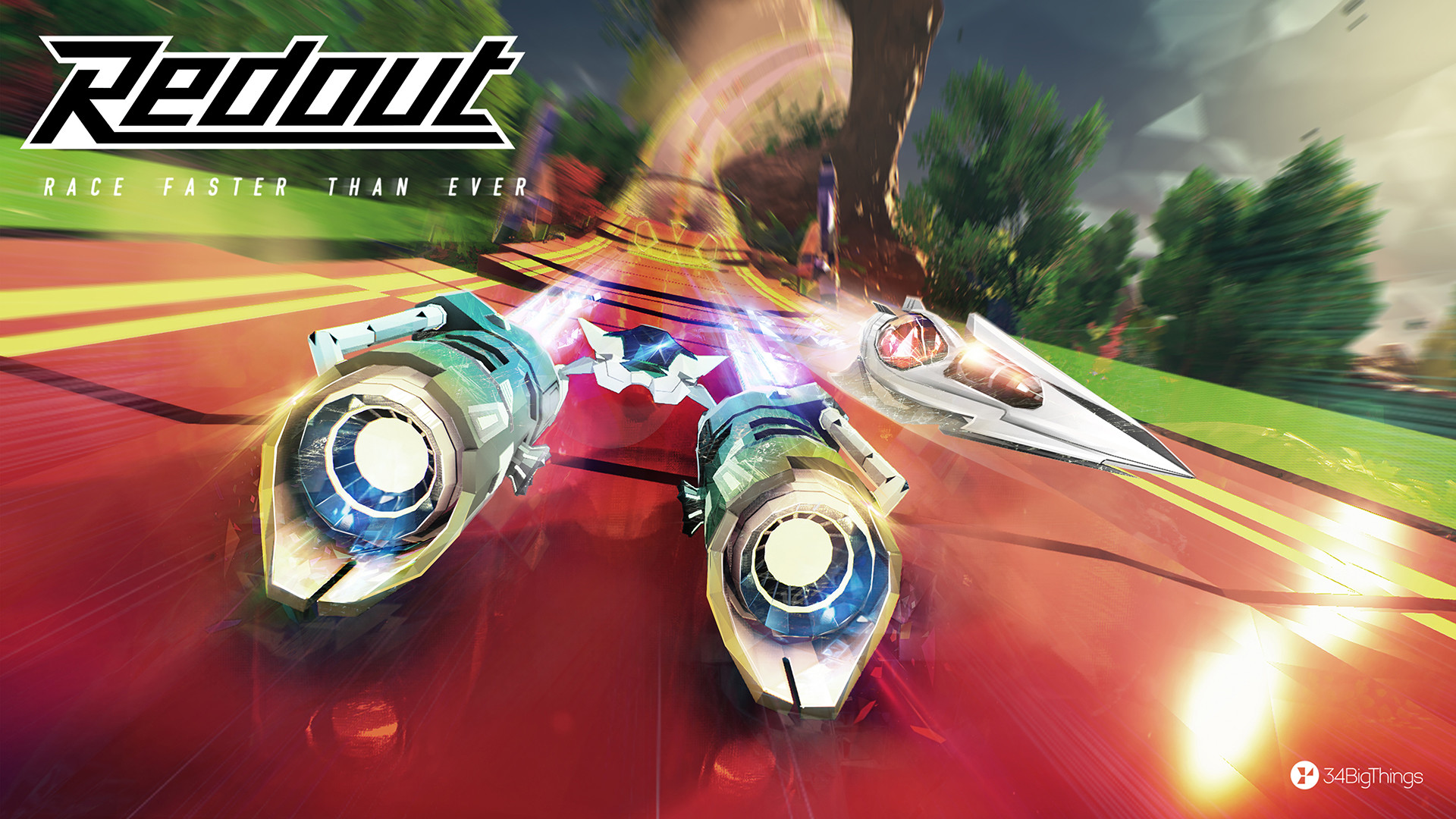 I’d like to start this article out by stating that I’ve always been a racing game fan. Just as we as young men (and sometimes even as older guys) we love jumping into a hotrod, tearing up asphalt (much to our neighbors’ annoyance), and blazing down the street, there is obviously some sort of primal fascination that we have associated with speed.

Luckily, ever since the dawn of the digital age, we’ve been afforded the opportunity to indulge in our naughty badboy behavior within a safer environment: our homes. Although there have always been many racing titles out there, dating all the way back to the mid-70s, such as Moto-Cross and Rally-X, 1982’s Pole Position was the very first racing game that garnered universal acclaim. Since then, I’ve played all assortment of racing games, from the classic Ridge Racer, to various Need for Speed titles (for better or for worse), and many more beyond those. However, there has long been a subgenre of the racing game legacy that has more or less disappeared: The zero G racing category. 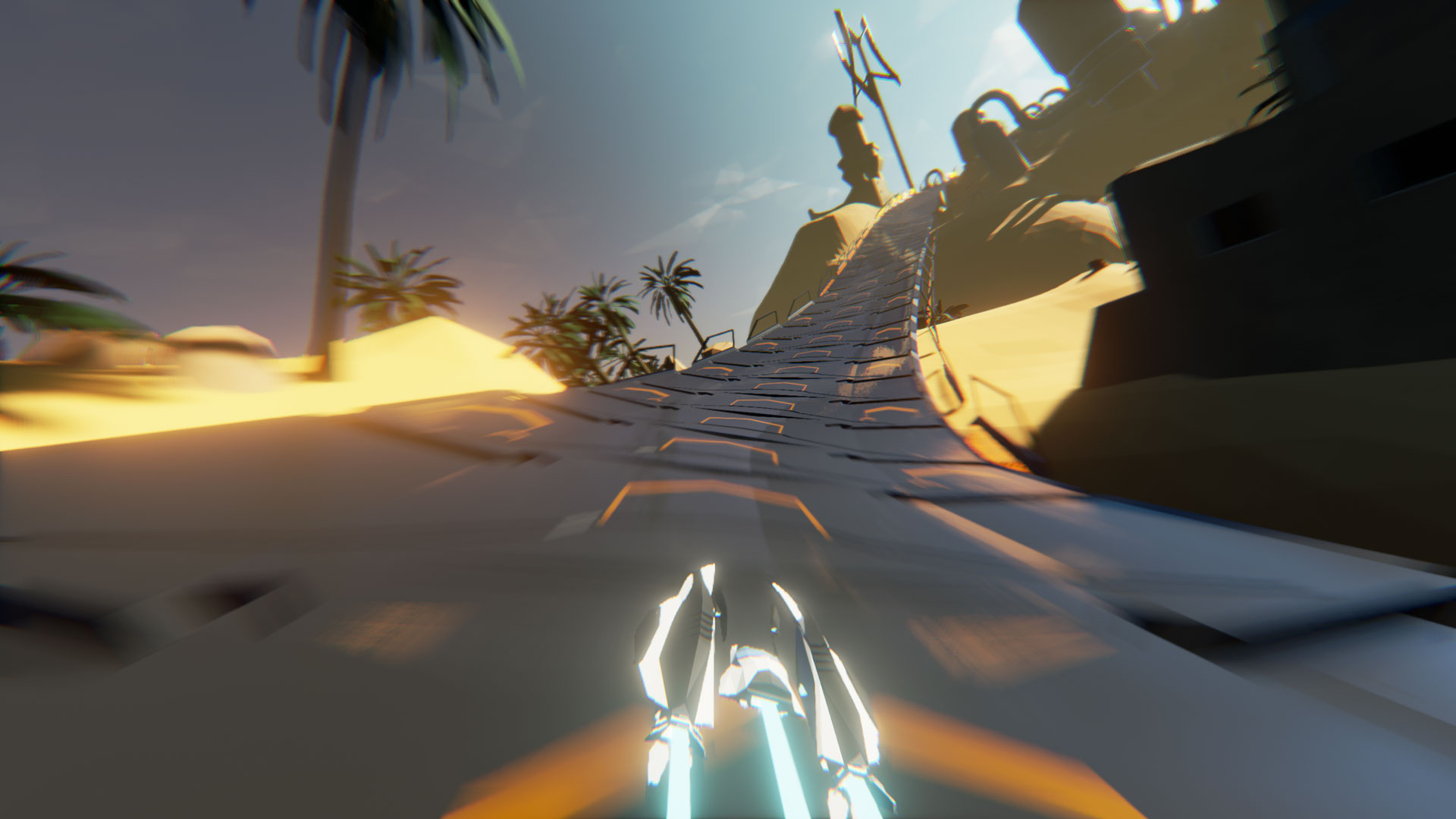 Zero G racers are unique because unlike more traditional racing games, they don’t necessarily have to abide by the laws of physics as closely. That’s because these racers take place somewhere in the future, where vehicles have much more powerful propulsion systems at play. In other words, the futuristic backdrops are just a good excuse for speeding everything up.

Zero G racers emerged in the late 80s, years after their more terrestrial counterparts had already laid the groundwork. These included such games as 1988’s Powerdrome, and 1991’s F-Zero. But it wasn’t until the excellent Wipeout came along in 1995 that I was truly hooked. The exaggerated sense of speed, futuristic-looking tracks, and engaging musical grooves (Come on, Chemical Brothers tracks in a game?), combined to make it one memorable experience. Although the original Wipeout spawned a few sequels, by the late 90s, the zero G craze has basically died out. That is until recently.

Italian developer 34BigThings seems to have picked up on the fact that gamers have long been clamoring for a new age of futuristic racers. Heck, every once in a while, I’ve even entered “Wipeout” into my search engine to see if a new version was coming out any time soon. Well, thanks to these highly creative Italian developers, I don’t have to wait any longer. 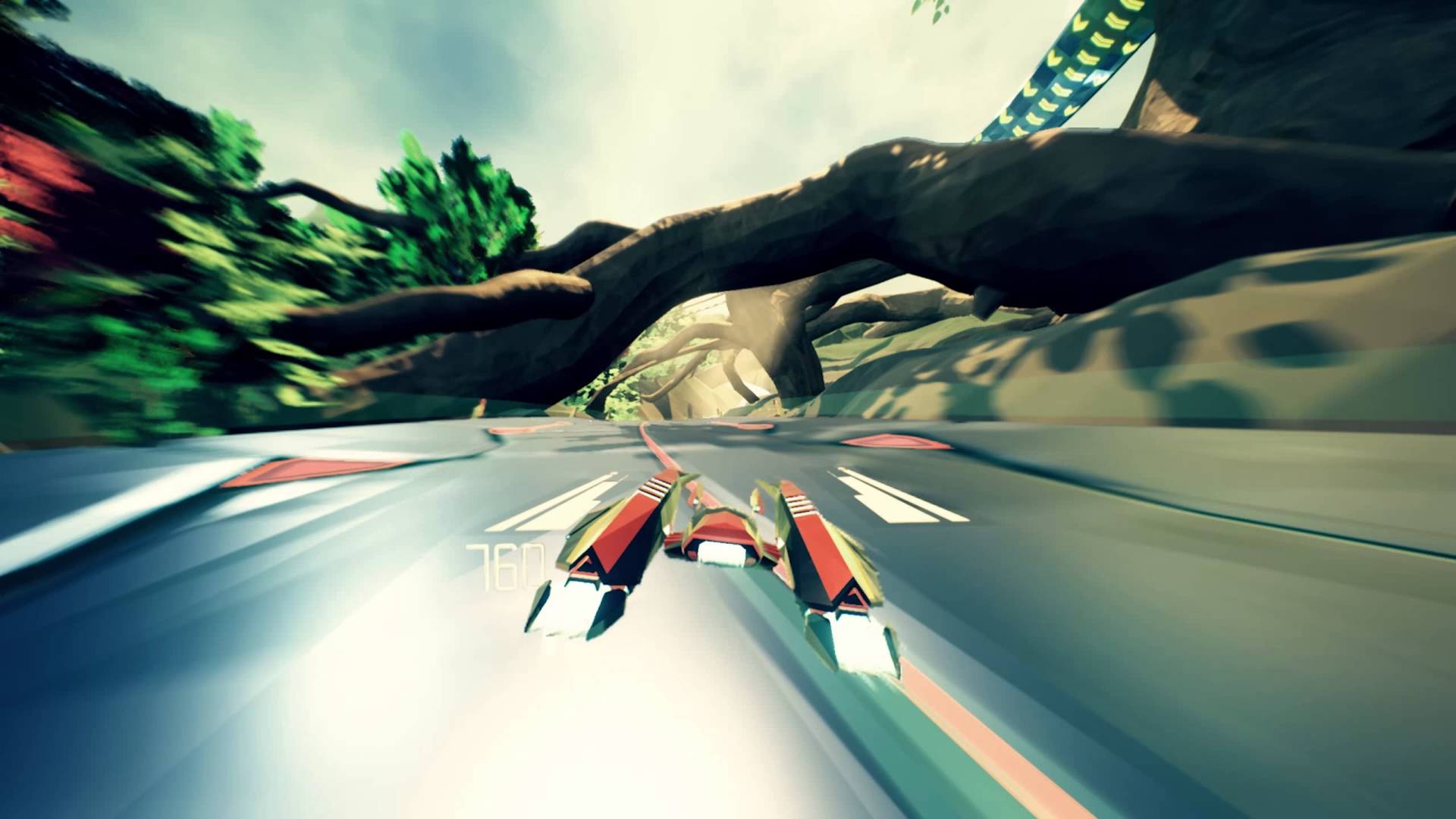 34BigThings recently unveiled their new futuristic racing title, Redout, and boy, is it a doozy. The first thing I noticed about Redout is its expansive environments. Whether you’re racing through winding canyons, gleaming cities, or misty forests, they are all beautifully rendered and a pleasure to behold. At first, I frequently crashed because I was so busy appreciating the backdrops whizzing by me to concentrate on my driving. Let’s just say that it was no surprise that the game’s developers cited Wipeout and F-Zero both as major inspirations.

Redout adds its own unique ripple to the classic zero-G formula however, by giving players the ability to not only strafe from side-to-side like any other racer, but also control their craft’s pitch. This adds a new dimension to consider, as sometimes you will have to pull back when ascending certain points along a track, and other times aim downwards. This really encourages you to learn each of the diverse tracks as much as possible, in order to know where to better perform these subtle maneuvers. 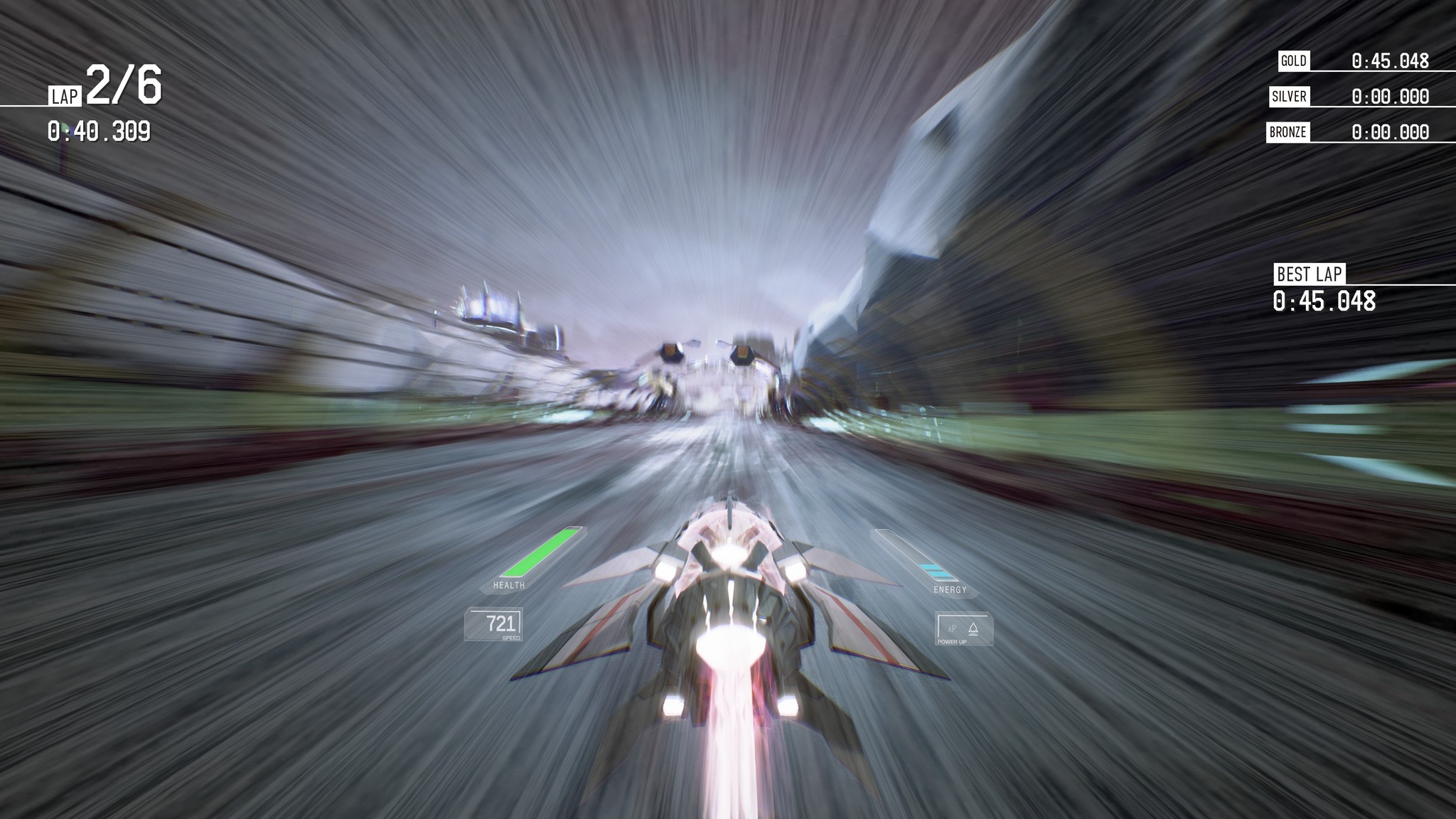 This track knowledge factor is further highlighted by the fact that however fast your vehicle is moving, you never really have to slow down that much, even though sometimes you’re traveling in excess of one thousand kilometers per hour. Early on, I frequently found myself slamming on my craft’s airbrakes in order to avoid colliding with a track’s side rails, but as I became more comfortable with each of their layouts, was able to barrel right through even the most challenging corners. Once you start getting good at everything, the whole experience can really become quite exhilarating.

Unlike similar zero-G racing titles, you won’t find any glowing power-ups to glide over on any of Redout’s tracks. Rather, you can pick and choose your vehicle’s augmentations and weapons between racers while it sits in your garage. This is not only much more realistic, but also gives you time to strategize and adjust your loadout prior to each race. For instance, at one point, I was frequently getting beaten by a certain player during multiplayer races. That was until I realized that I was picking the wrong equipment to counter his loadout. Once I figured that out, I altered my vehicle’s inventory and voila, I beat his virtual pants off from there on out.

Redout’s career mode sort of doubles as the game’s tutorial. This mode gives players the opportunity to try out the fantastic, wide array of futuristic vehicles on hand, as well as learn the various tracks. Once you’re more comfortable with everything, however, Redout’s stellar multiplayer mode is where the fun is really to be had. Simply put, there is nothing like zipping around space-age looking tracks, all the while fighting off other real life humans. 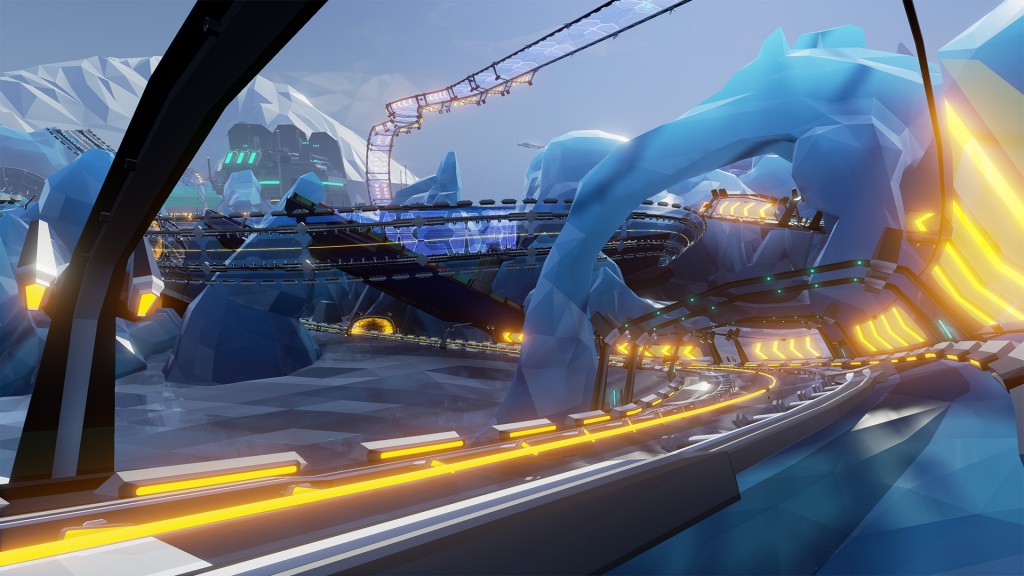 Earn top spots in either single or multiplayer matchups, and you’ll be awarded money with which to purchase new weapons and upgrades for your vehicle. You can even own several vehicles at the same time, which is great since it allows you to utilize certain ones for specific race events.

Redout’s visuals are simply stunning, with artistically crafted backgrounds, slick looking tracks, and gorgeous vehicle models. What really blew me away, however, was the game’s sheer sense of speed. You really do feel as though you’re slicing through the air at breakneck speeds. It was so impressive that I just had to show it off to friends while playing it on my beefed up gaming laptop. They were quite impressed. 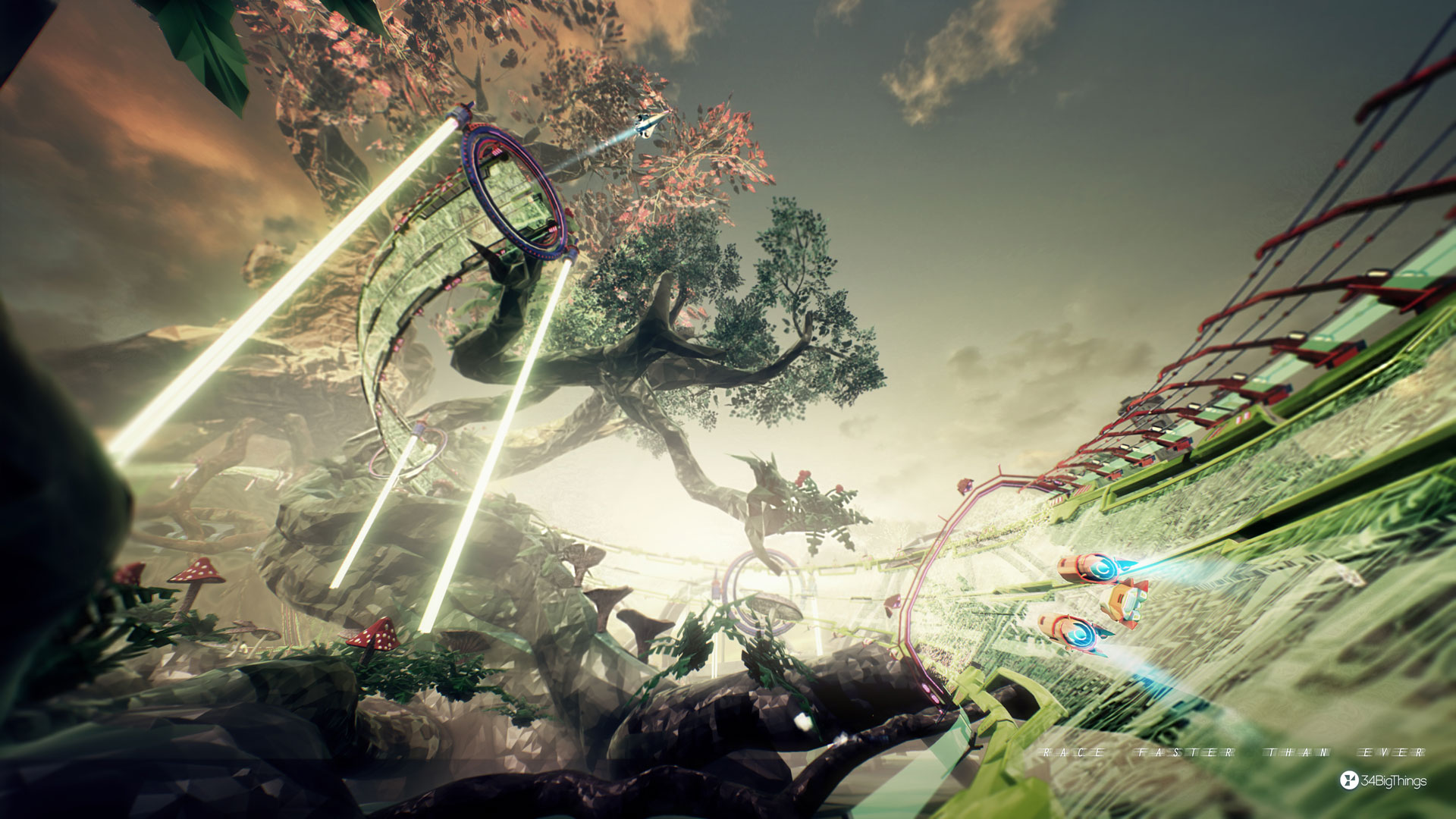 Redout signals the reawakening of a subgenre which has long been lying dormant for too long, the Zero-G racer. Fortunately, there are a whole host of other futuristic racing games coming out which will only kindle interest in them. But for now, Redout is the clear cut king of them all.