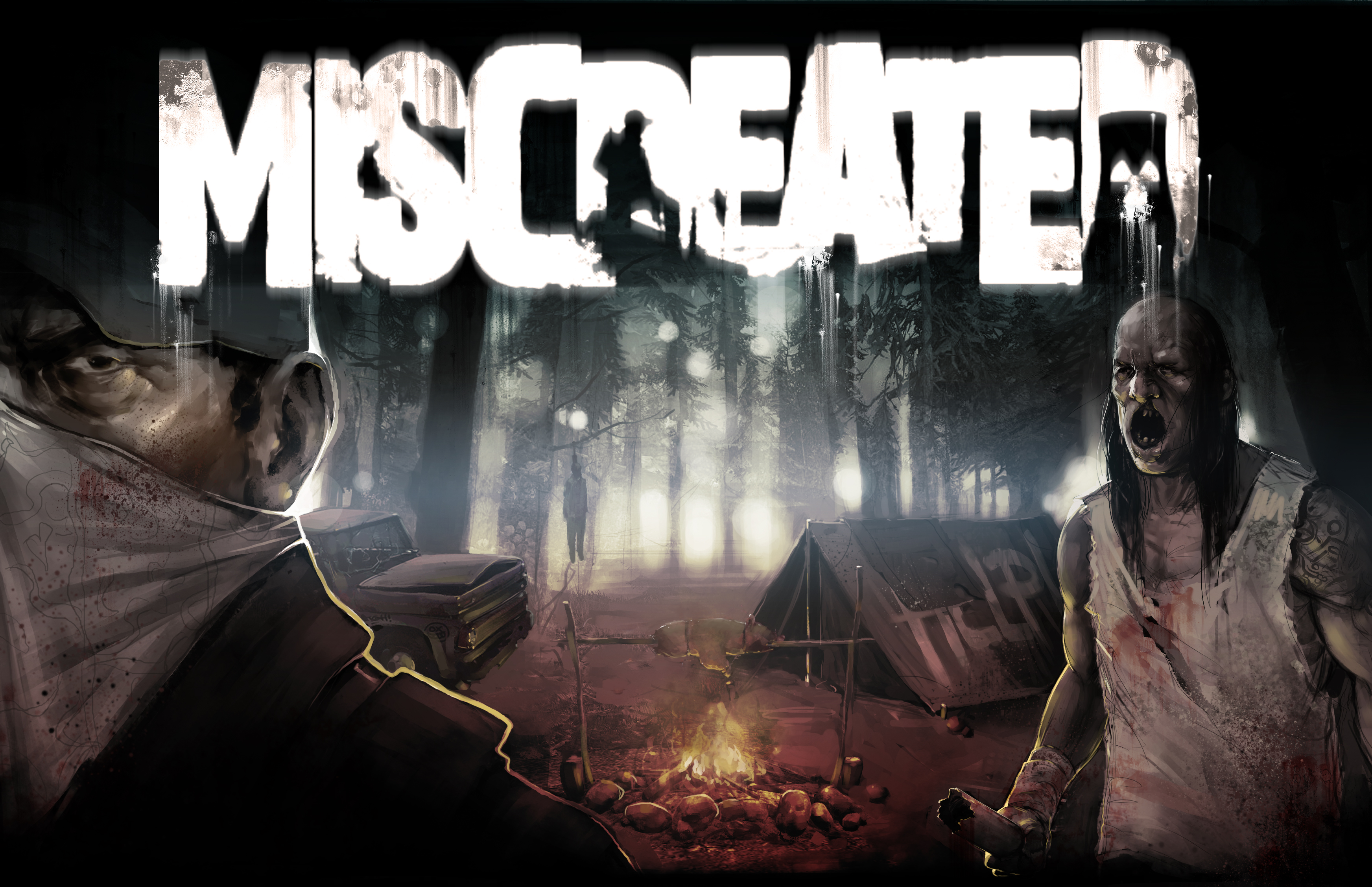 Rust has been my go-to survival game for quite some time now. I must admit that although I really like Rust’s gaming mechanics, the toxicity of the community that plays it regularly, can really be off putting. In that regard, I can only take Rust in shorter bursts nowadays.

A gaming friend of mine seemed to sense my frustrations with Rust, and gave me a call the other week:

“Hey man, have you tried Miscreated?” he queried.

“I hear its community is much nicer, and less likely to kill on sight.”

That was it. We quickly got the game and after downloading it on Steam, dove right in.

Much like in most survival games out there, in Miscreated, you spawn in at some random location and have to find your friends. Unlike Rust, however, in Miscreated you don’t begin the game wearing your birthday suit (naked) with merely a rock and a torch. In this game you start with some basic clothes on your back, but no tools or weapons. 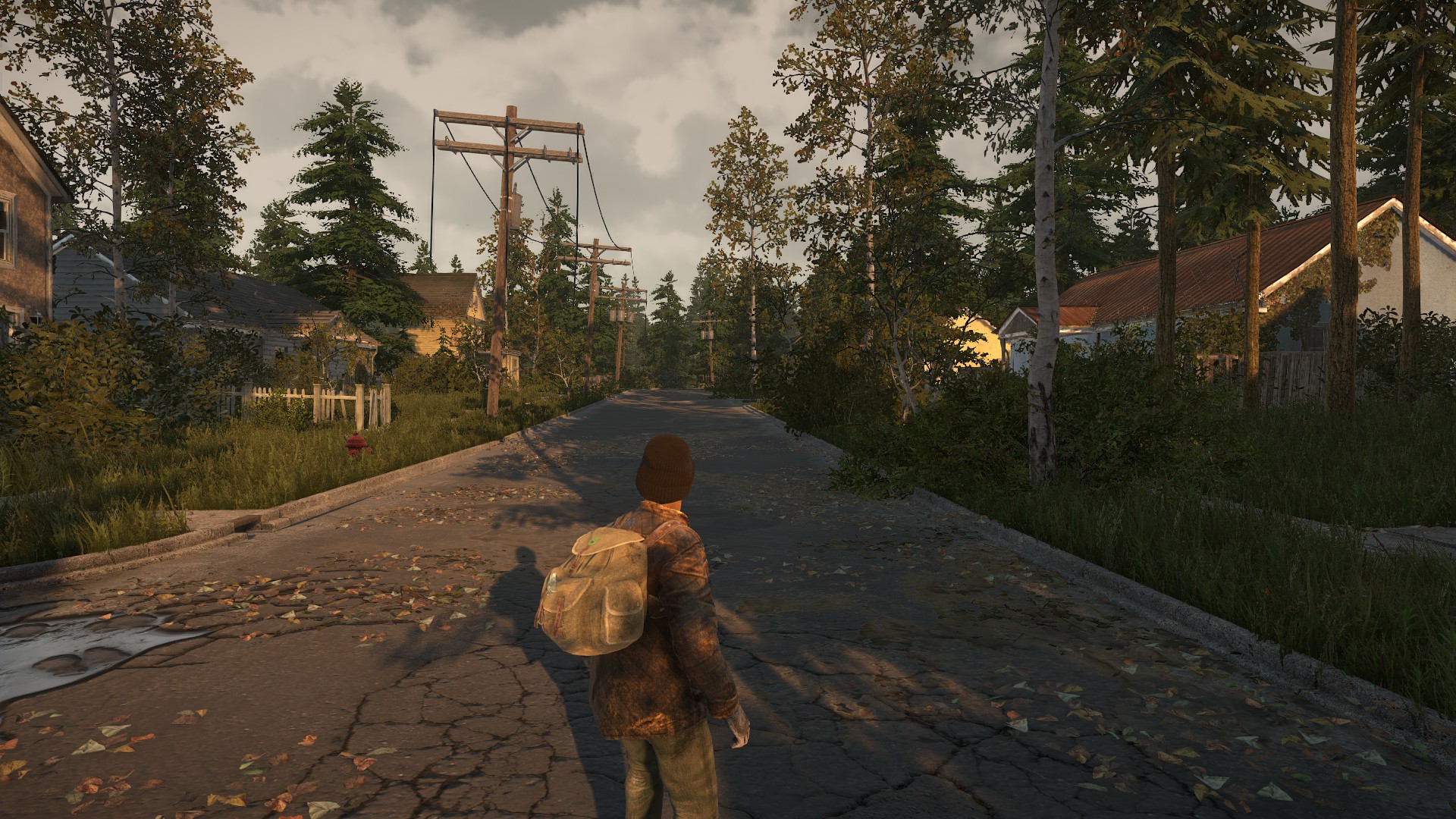 Miscreated takes place in a post-apocalyptic setting, but I noticed right off the bat that there was a lot more reclamation going on in its environs than in other similar survival titles. I spotted vines and moss growing on the exteriors and interiors of buildings, while weeds and tall grass claimed most outside areas.

During our opening moments, my friend blurted out: “I’m being chased by a tornado!” followed by a blast of his nasally chuckle. I promptly scanned to horizon for a tornado and, in moments, spotted one. Soon, we were both running from said tornado. After seeking shelter within a small town, the twister wandered off and a heavy rain began to pour down on us. I must say that we were not only impressed by Miscreated’s stormy sounds, with crackling lighting and rolling thunder, but the rain effects were a real treat to behold—probably the best we’ve ever seen in a game. 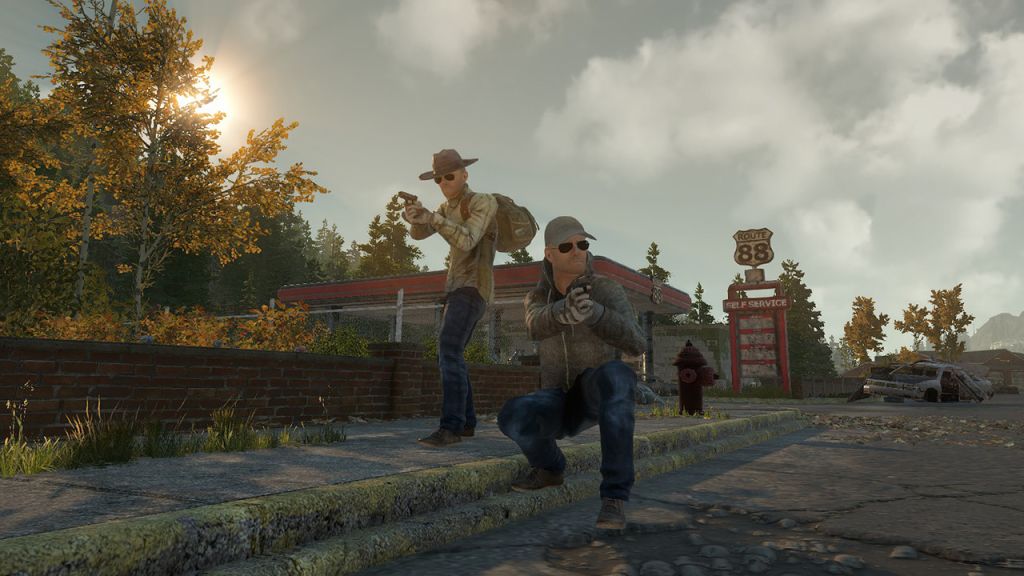 From there, we scavenged for what we could, noting that while food and water were a little easier to find, weapons and ammo were scarce. This was another thing I appreciated about the game. Whereas in games like DayZ and H1Z1, weapons are littered everywhere, in Miscreated, not only are weapons few and far between, but they are also hard to spot.

Sometimes I’d be going through a room and have to really inspect every nook and cranny of it in order to find anything of value. Food items can be found in logical places, such as upon the dusty shelves of abandoned stores, or within the decrepit kitchens of dilapidated houses.

Miscreated also has a crafting system, and you can mix and match your resources in order to build all sorts of items, even crude weapons. Pretty early on in the game, my friend was able to craft a makeshift firearm and I, a provisional backpack. Bases can also be erected, but first you have to locate a “claimed land” sign to stake out your territory. Base building is somewhat simple right now, similar to H1Z1’s, as opposed to the fully featured system that Rust enjoys, although I’m sure the developers will add more to it in the future. 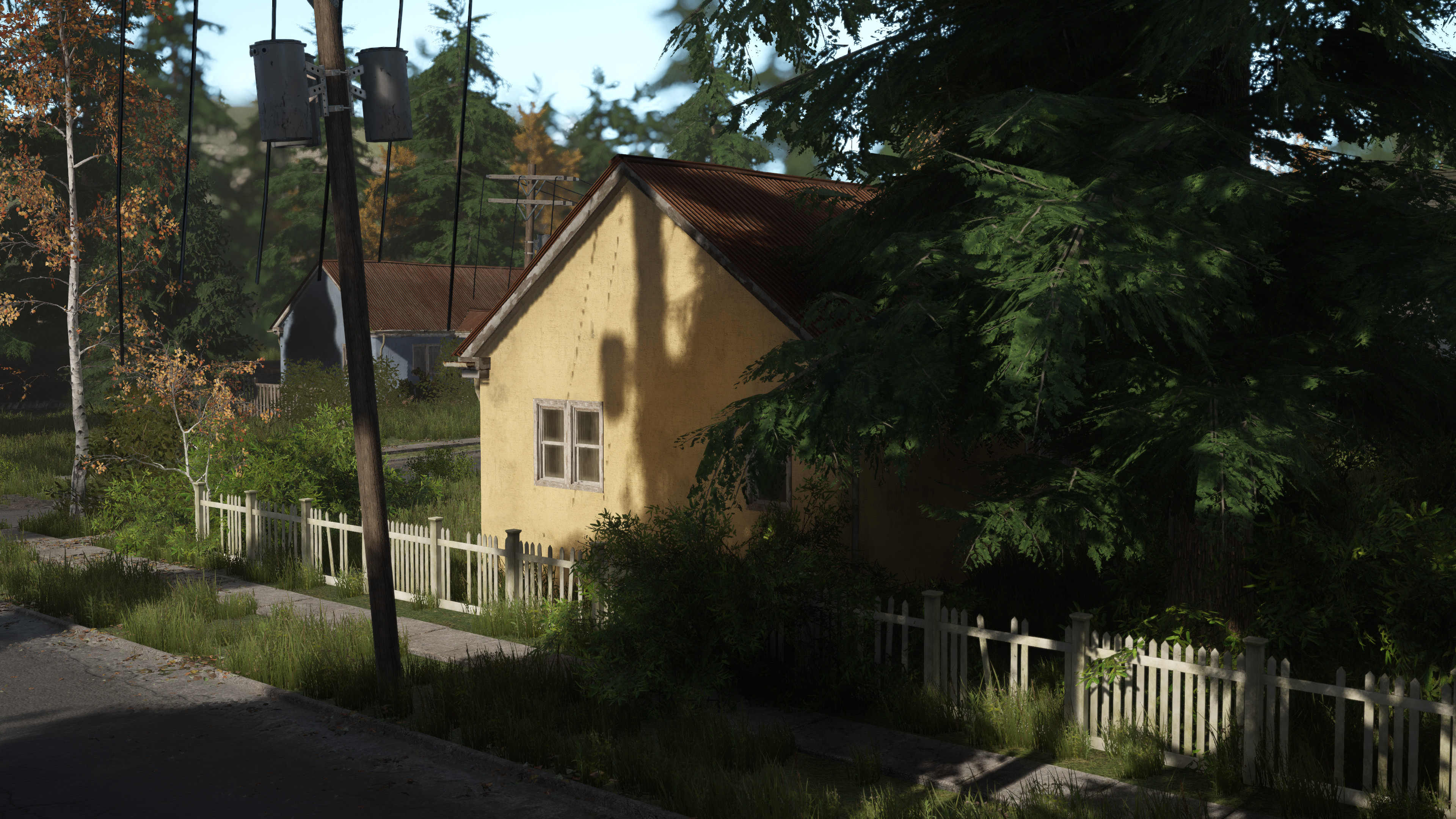 We did encounter some other players in-game as well, and so were able to run our “how-toxic-is-this-game’s-community?” test. Our first run-in was with a single player, while were scouring through a town for supplies. Using Miscreated’s convenient hand-signaling system (used by pressing the various function keys), we first waved at each other. When we were close enough, we engaged in some friendly conversation using the game’s built-in local voice chat system. We traded a few goods with the stranger, exchanged some more pleasantries, and then parted ways. Pretty good first impression, I must say.

Our second human encounter involved us running around on the outskirts of a larger town, and upon hearing a bunch of gunshots, crouching down to see who was doing all the shooting. We managed to slink through some bushes, only to emerge right next to a group of heavily armed strangers. My friend and I collectively gulped as we looked at the group’s feet and spied the several dead bodies of other survivors.

We quickly relayed to them that we meant no harm, and through careful diplomacy, eventually de-escalated any potential for violence. The group told us that they had been set upon by a few bushwhackers, and in turn, had killed them. One of them then drove up in a car and offered us a lift. After looting the bodies of the would-be ambushers, we all left the scene and began exploring more of the map, and another great impression was gleaned (we later formed a clan together). 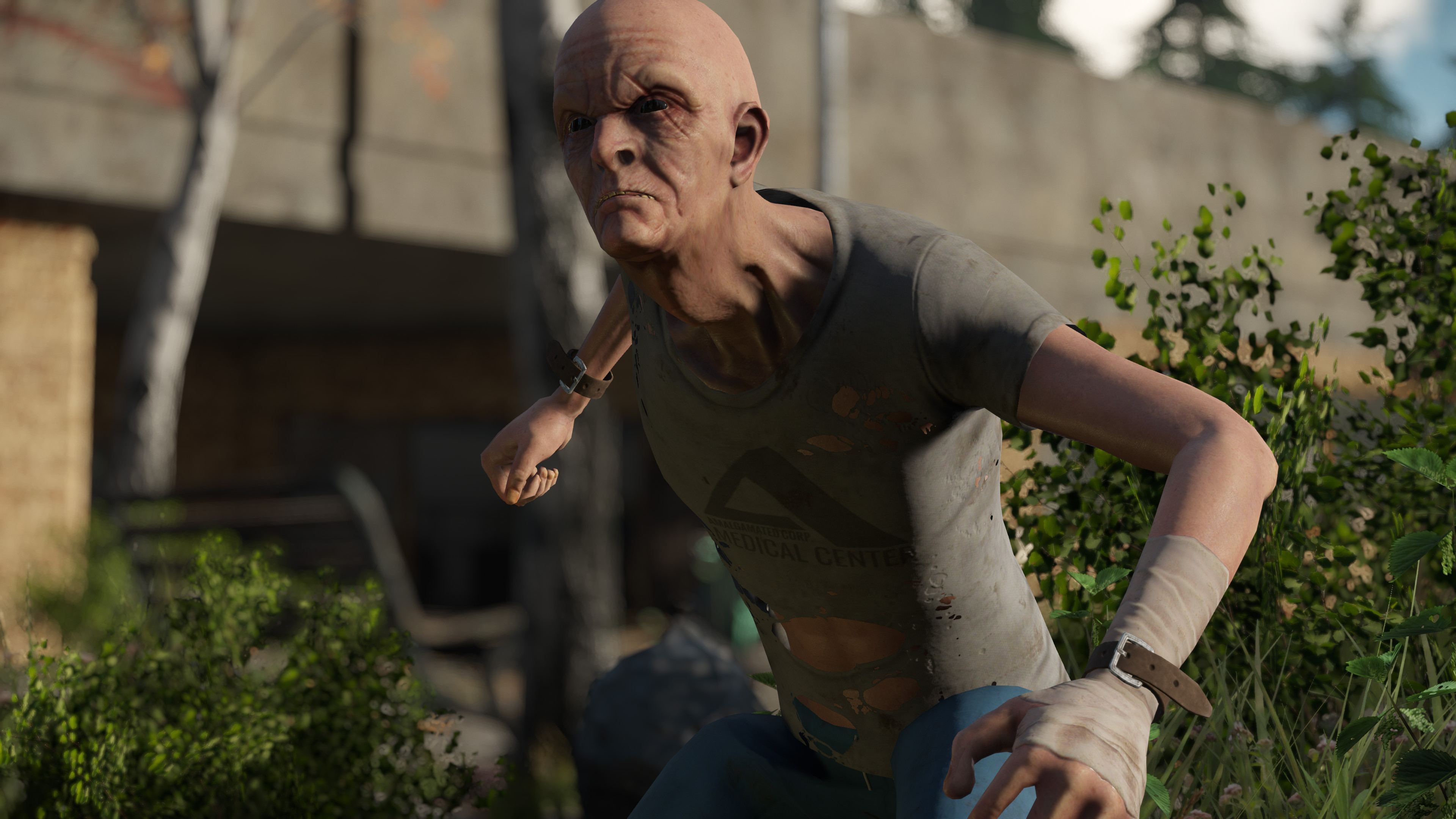 Throughout my Miscreated play through, I learned that, while not entirely original, it seems to take only the best facets from other games, and combine them into a better package. For instance, it indeed has AI enemies in the form of mutants, as opposed to zombies, which can track you down and hurt you bad. This is a feature I enjoyed about H1Z1’s zombies as well, as it is naturally more conducive to PvE play instead of PvP. It also has the funky, lived-in environments of DayZ, although the level of detail in Miscreated is much higher as it uses the CryEngine. It also has vehicles, something that Rust lacks as of now. Playing on a beefed up Sager gaming laptop with a GTX 980, I just had to show this game off to some friends. Let’s just say that they were highly impressed to say the least.

A couple of things in Miscreated need some work here and there. The view distance is a little limited as of right now, but since it’s only in Alpha, I’m sure that this will be addressed by the developers. Also, there aren’t many mutants running around on the map, but I’ve heard that this is also due to the game’s early stage of development.

Other than those minor issues, Miscreated blows doors on any other survival title I’ve seen to date, in terms of its immersion factor. Unlike the copy and paste house layouts within H1Z1 or DayZ, each house or store that you come across has their own unique layout to varying degrees. Their interiors are also individualized, and you will never see the same vegetation or furniture placement from building to building. Your character also leaves footprints in the ground or mud, which stay there for a few minutes. If you aren’t careful, other players, and even mutants, will see these and can track you down. 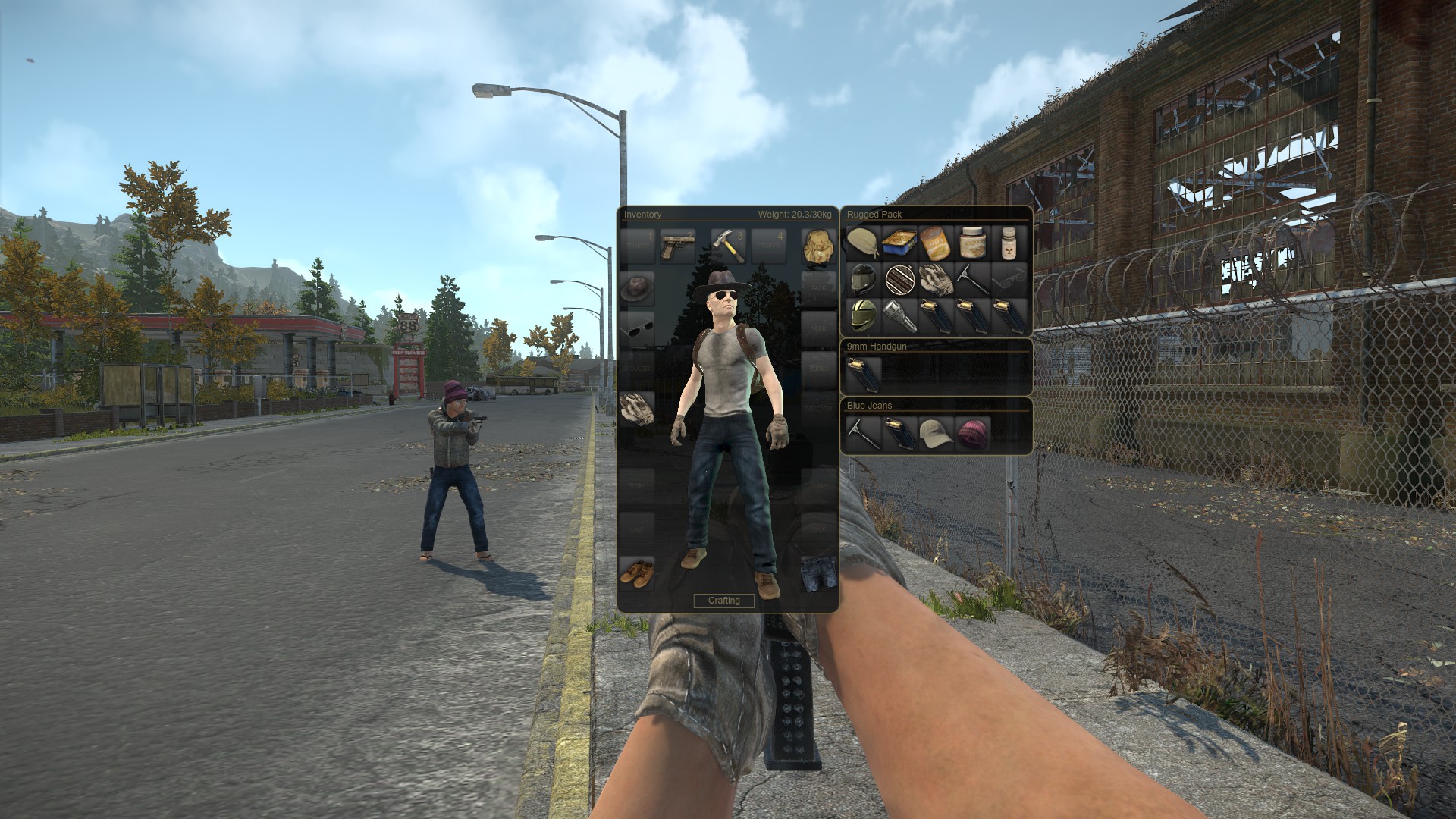 The lighting and shadows are also stunning. Light rays cascade through tree branches as the game’s minimal (at this point) wildlife scurries around through highly detailed vegetation. The sound department also nailed it, and you’ll heard the wind blowing by you, bushes rustling (which can be unsettling at times), and leave blowing. This is simply the most well-articulated survival title I’ve ever experienced.

Miscreated still has a ways to go before it reaches its maximum potential—it needs a little more content as well as some work on its AI denizens to be sure. But it does have a sturdy foundation on which to build upon, and in its current state, is already more interesting than the other “me-too” survival titles out there. In fact, I may just be making a permanent switch from Rust to Miscreated, and that’s saying a lot.