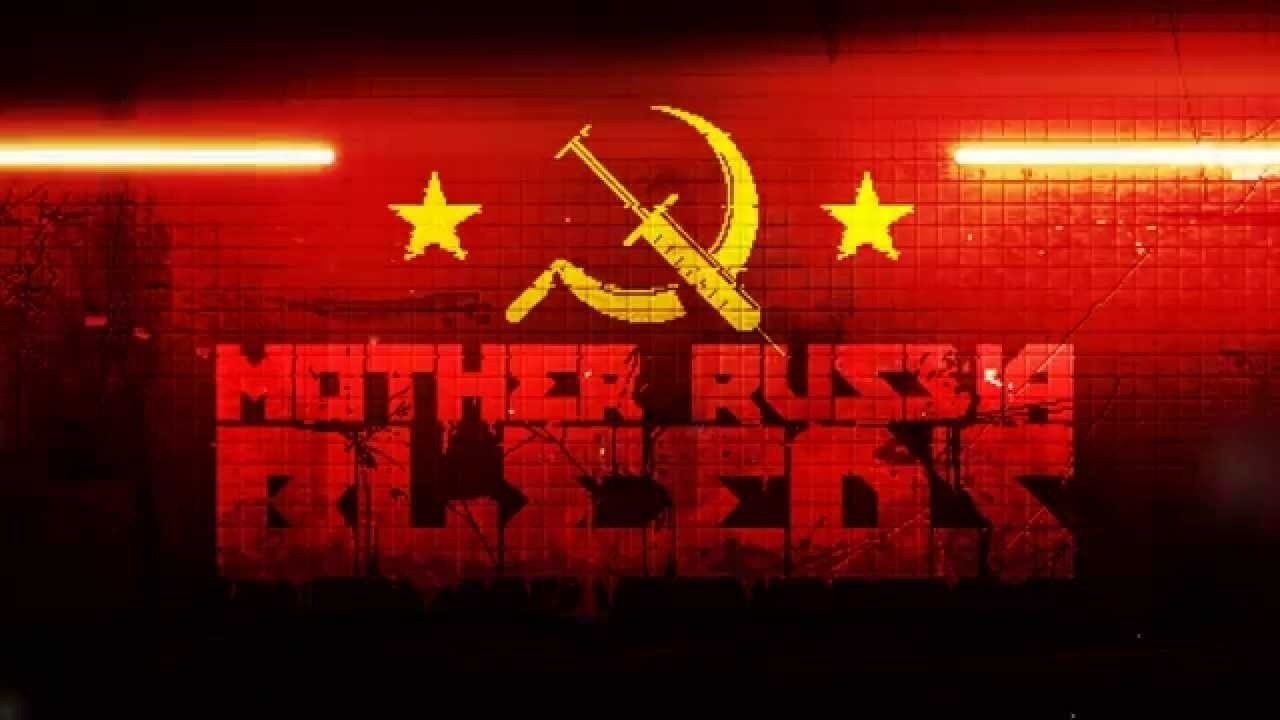 I must begin my review of Devolver Digital’s new side-scrolling beat ‘em up game, Mother Russia Bleeds, by proclaiming that I am a huge proponent for politically incorrect humor. Therefore, when I tried out Destructive Creations’ nihilistic shooter, Rage, last year, I was instantly not a fan of it. Rage’s gruesome proceedings and gameplay elements were about as politically incorrect as you could get, but its nihilism-for-the-sake-of-nihilism approach left many gamers feeling as though they needed to take a shower after playing it. Rage was completely bereft of the black humor that existed in its forbears, such as the infamous Postal.

On the other hand, Mother Russia Bleeds is just brimming with dark comedy. Its tongue-in-cheek brand of humor will probably be lost on younger gamers, but those who are well versed in sarcasm and cheeky allegories have a lot to chew on here. 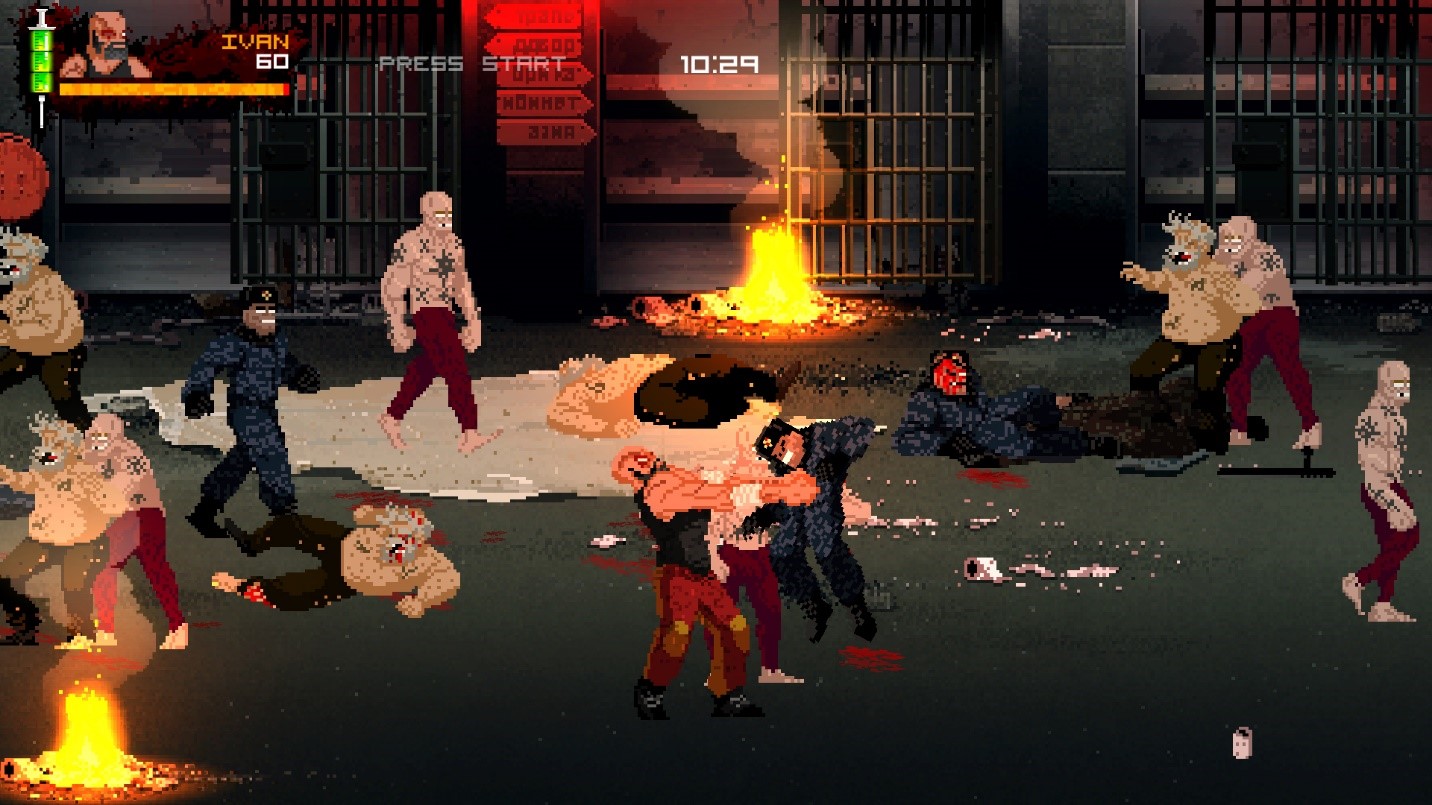 Mother Russia Bleeds kicks things off by dropping you in the shoes of a gypsy who has been imprisoned by an nefarious underworld cartel. After being kidnapped, these goons saw fit to inject you with a nasty little drug called Nekro, which also seems to afflict the majority of the population. You begin the game by breaking out of your confinement and, filled with a vitriolic anger like no other, go on a rampage and kicking the living you know what out of anything that gets in your character’s path.

You’ll start off by going up against low-level goons and gangsters, convicts, and vicious feral animals. Later, you’ll encounter tougher enemies, like trained attack dogs and disciplined military personnel. Luckily, you’ll have plenty of time to get familiar with Mother Russia Bleeds’ controls by then—and you’ll need to. The enemies arrayed against you have all sorts of tricks up their sleeves, which fits the grime-infused style and ample sleaze on offer, perfectly. 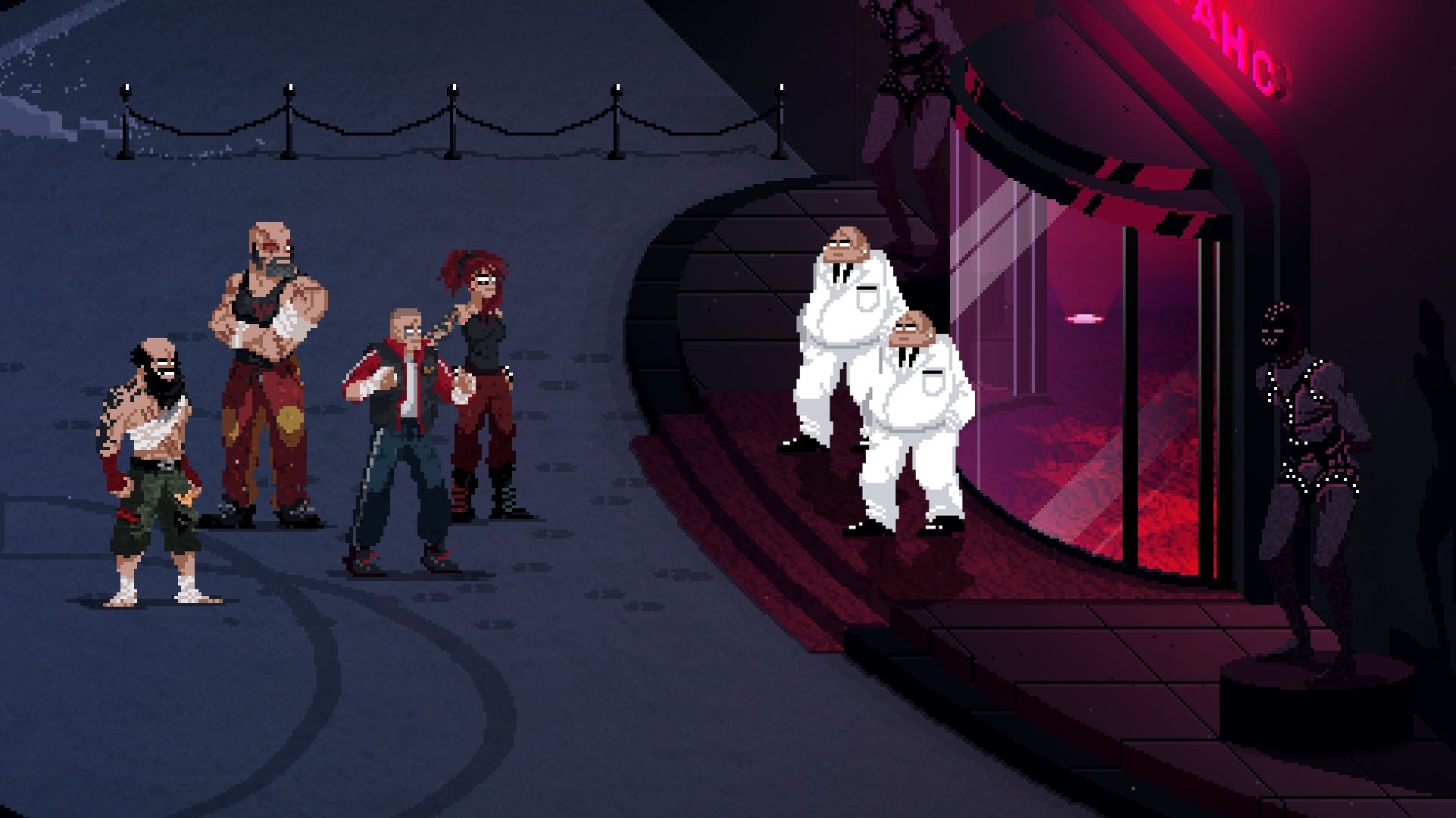 Mother Russia Bleeds’ boilerplate narrative is revealed piecemeal in the form of crude, text-based dialogue boxes. This will probably waft by most gamers in a haze, however, as the game is obviously not attempting to deliver any sort of grand, Shakespearian tale here. It’s all about vengeance, smashing people’s faces in until they break under your bloody fists, and keeping yourself relatively healthy enough to progress throughout the game’s numerous stages.

Unlike the classic beat ‘em up games of yore, such as Final Fight and Streets of Rage, there aren’t any health pick-ups to be found in any of Mother Russia Bleeds’ gritty environs. Instead, players regenerate their health by dispatching their enemies and then extracting Nekron from their twitching bodies. You see, Nekron is the lifeblood of the game. But you can’t just get it from any felled foe, only ones which fall to the ground and begin to spaz out.

This can be trickier than it seems, however, since foes will only twitch for oh so long before turning cold. So, it can be problematic to extract the precious drug from their crippled bodies since you’ll frequently be surrounded by mobs of enemies. Other times, I found myself beating the tar out of my final on-screen foe, with my health bar severely diminished, only to be whisked away to the next stage and unable to get to any twitchers laying around. 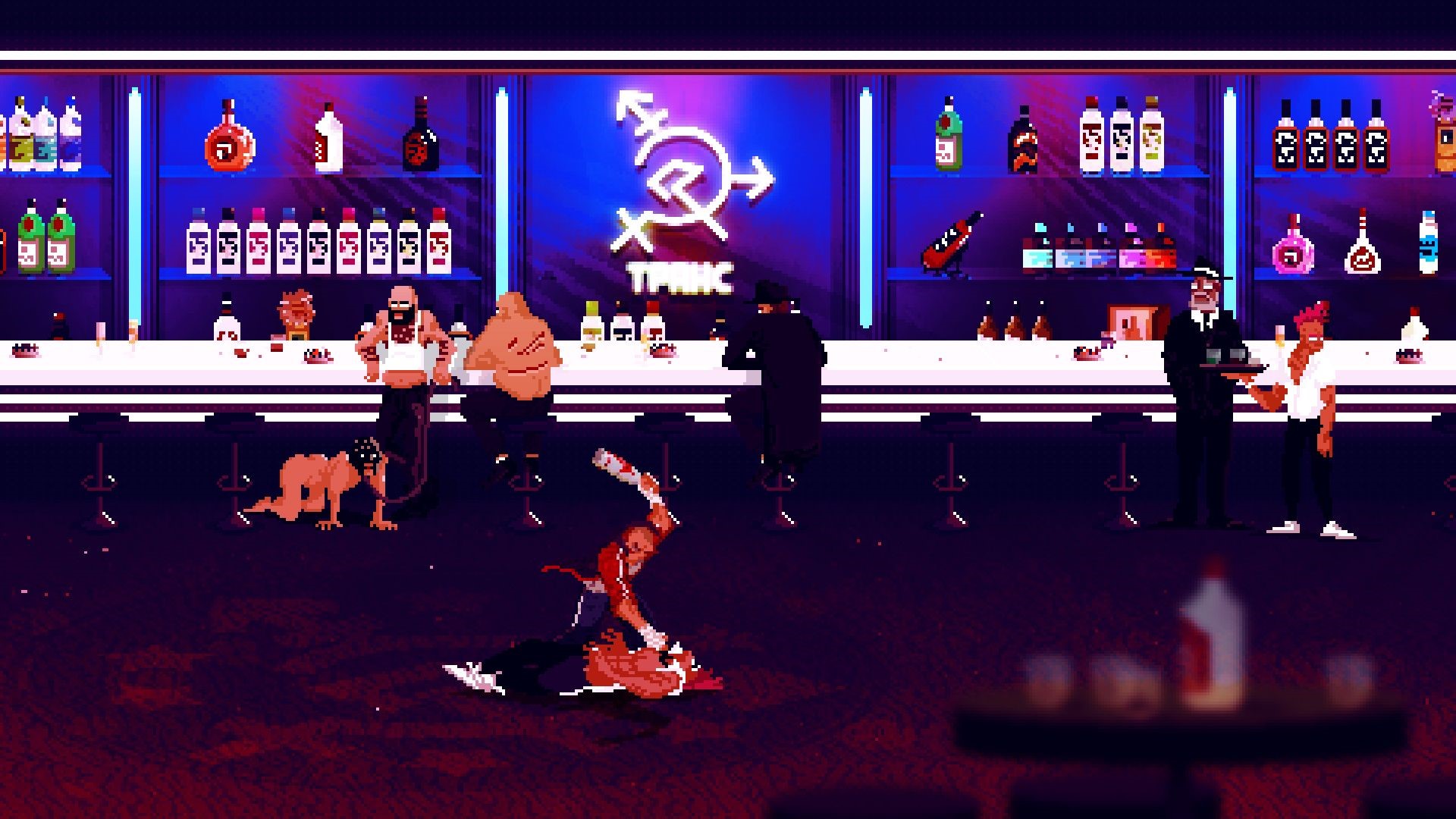 The game’s controls are fairly straight forward. You can punch, kick, and throw enemies. You can also pick of items and weapons such as bar stools and knives, and use them to turn the tables on your adversaries. There is ample bloodshed to be found throughout Mother Russia Bleeds, as you can not only smash foes into bloody pulps with your regular attacks, but you can also deliver killing blows which can result in buckets of blood and gibs exploding onto the screen. I found the violence to be so over the top that it elicited many a sniggle, but I can see how some of the more uptight folks out there might get offended.

One thing that I didn’t really like about Mother Russia Bleeds is that the combat system lacked a lot of variety, at least as far as your character goes. Sure, the enemies have all sorts of dives, takedowns, knife slashing rushes, and so on, but your character? Not so much. What was also missing, and what I really loved about old-school beat ‘em ups, was the ability to do more diverse attacks while playing multiplayer. Who can forget how fun it was to grab an opponent from behind in a full nelson while your partner laid into their helpless bodies like a side of beef? Or, knocking enemies silly until they were wobbling in front of you in a stunned state, and then having your buddy deliver a jumping side kick to them and knocking them off a cliff or building ledge? 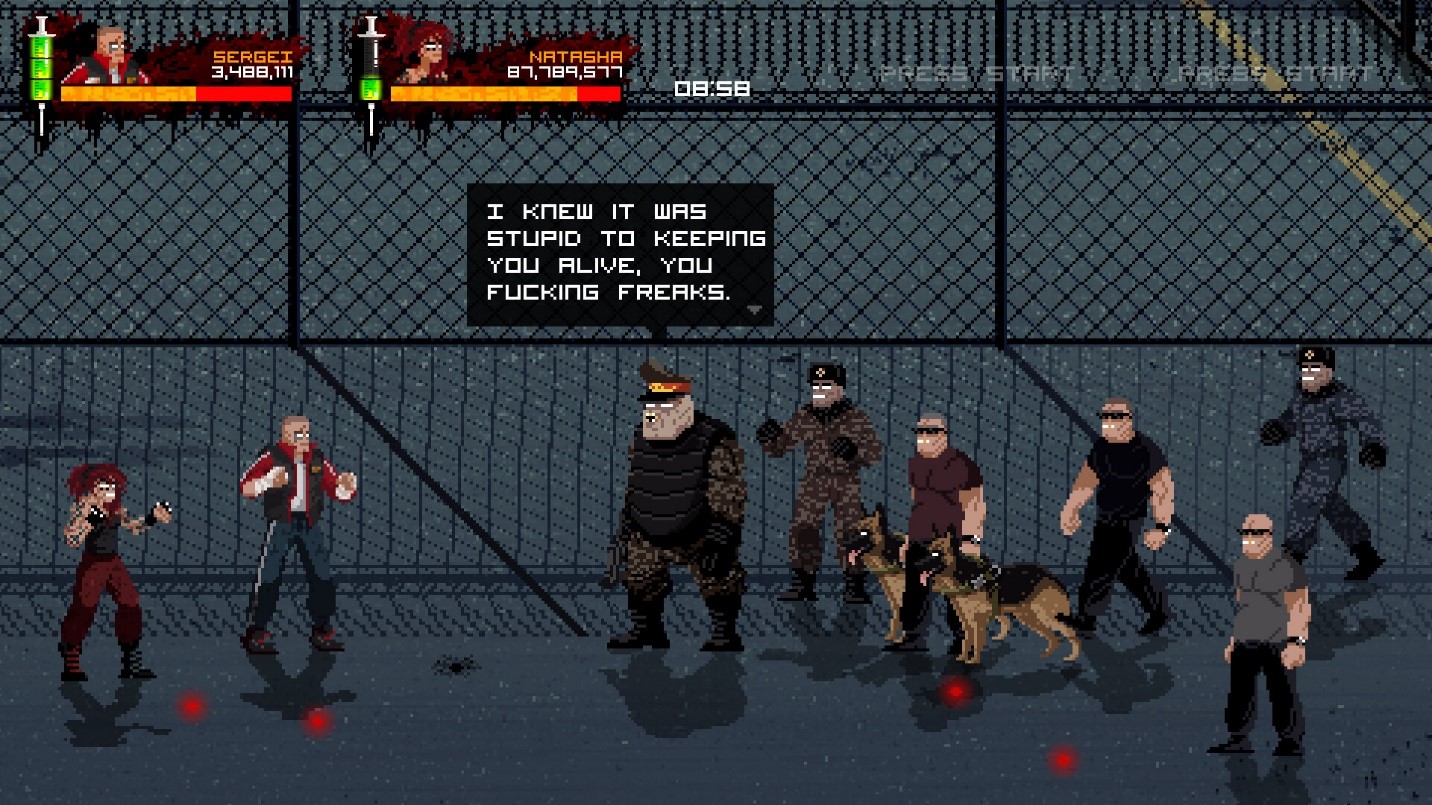 I also would have liked to have seen a separate meter for both your special attacks and health. As it is, Nekro fuels both your special abilities as well as your health bar. Unfortunately, since you get beset upon by so many legions of enemies, that Nekro usually gets used to heal yourself, leaving nothing for your super-powered attacks. I would have loved to have seen more of the brutal killing blows that my character was capable of, but was forced to utilize any Nekro that I came across for health replenishment. It seemed like a wasted opportunity for a game that is unapologetic in its displays of grisly violence.

Mother Russia Bleeds features some pretty good graphics which echo the classic brawlers of the 90s. Some of the floor and background textures were dodgy, but overall conveyed a sense of wanton sleaze and gritty blood-caked (along with other fluids) grime. The enemy types were easily distinguishable, and some of the more extreme attacks, such as grounding an enemy and then pulverizing his head clean off, were pretty well handled. Like I said, the bloodshed on display was so surreal that I couldn’t take it all that seriously—which is part of the game’s appeal. 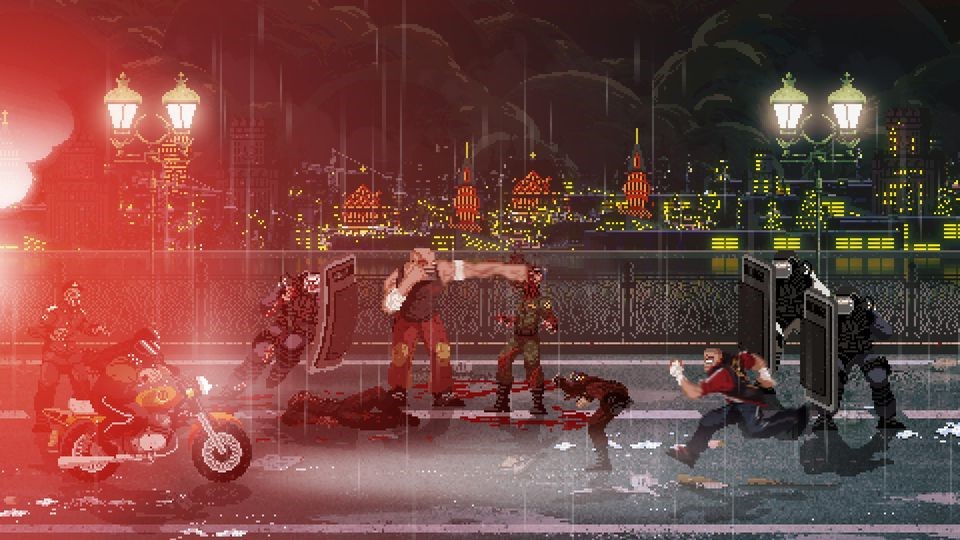 In all, Mother Russia Bleeds is an nod to the old-school brawlers of the 90s. It features responsive controls, nifty retro graphics, tons of gore, ample bloodshed, and makes you feel like an angry and confused tween living out a hyper-violent power fantasy. Its hypnogogic violence and unabashed political incorrectness may offend some gamers, but for those of us who are less prissy, it is quite a fun gaming experience. Try it on a gaming laptop and show it off to your friends.