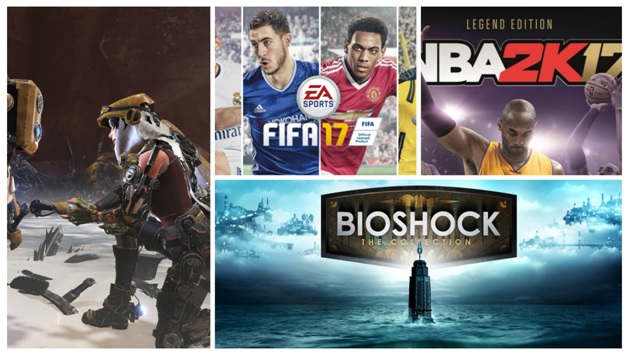 From BioShock: The Collection to the upcoming release of FIFA 17 and NBA 2K17, September offers a lot of new games for us to try. So without further ado, here are 10 of the biggest games coming out this month.

Let’s check them out!

Discover the beautiful world of Umbra and its haunted past with Amon and other remarkable heroes. Earthlock: Festival of Magic is a turn-based role-playing video game, where the player collects a set of heroes with different personalities and abilities. Explore, fight monsters and save Umbra from its impending demise.

BioShock: The Collection is the upcoming remastered version of three BioShock games published by 2K Games — BioShock, BioShock 2 and BioShock Infinite. It will also include downloadable content packs such as Minerva’s Den and Burial at Sea. The games all run in full 1080p resolution at 60 frames per seconds–something you’ll enjoy in a 4k gaming laptop.

Enter the dystopian world of Far Eden as Joule Adams, one of the last remaining humans. Find new dungeons, fight enemies and look for treasures in the deserts of Shifting Sands, where massive sandstorms come and go. ReCore is a third-person adventure game developed by Comcept and Armature Studio.

NBA 2K17 is the 18th game in the NBA 2K franchise. Like the previous games in the series, it simulates the experience of NBA and allows you to play several modes including MyGM and MyLeague. Players and team can also be customized.

Cossacks 3 is a real-time strategy video game that features historical battles of the XVII-XVIII centuries. It is a remake of the classic game, first released in 2000. The game provides players with infinite tactical options from army developing to upgrading buildings.

FIFA 17 is the latest installment in the FIFA game series. According to its developer EA, the game will be the first one in the series to use Frostbite game engine. The game will feature the story of Alex Hunter as he joins the Premier League.

Shantae: Half-Genie Hero is the fourth game in the Shantae series. Explore Scuttle Town and discover the genie realm hiding in a magic fountain. Play as the half-genie Shantae and use your genie-abilities to defeat enemies and escape traps.

Race and win in the world of Forza Horizon. This upcoming racing video game from Playground Games and Microsoft Studios is set in an open world environment. The game features a cross-platform play and will present over 350 cars for you to choose.

How about you? Do you know a new game to be released this September? Share the game in a comment below.