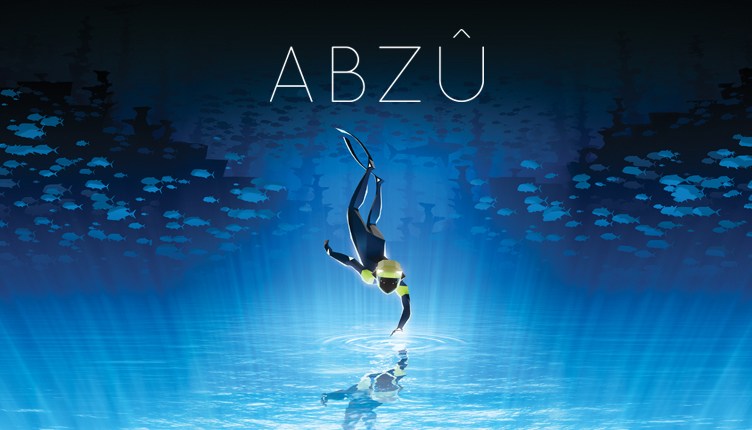 Upon hearing a little about Abzû from reading brief descriptions here and there, I gleaned that it could be one of those rare gems of digital experiences that only come along every once in a while. Therefore, I also was careful to not look at any of the images that accompanied said descriptions. Sometimes, too much information can ruin one’s subjective interpretation of something that should be more personal in nature—aw shucks, I just wanted for it to be a good surprise. Well, I’m happy to report that Abzû exceeded my wildest expectations in that regard.

I don’t think that I’ll soon forget the first time that I loaded up Abzû. I found myself as a lone swimmer, awakening close to the surface of a vast ocean expanse. I soon found that I was apparently amphibious as I broke the water’s surface and scanned the horizon. After spotting what looked like a patch of algae on the ocean’s surface, and had my swimmer take his first dive underneath the waves in order to swim off in that direction. 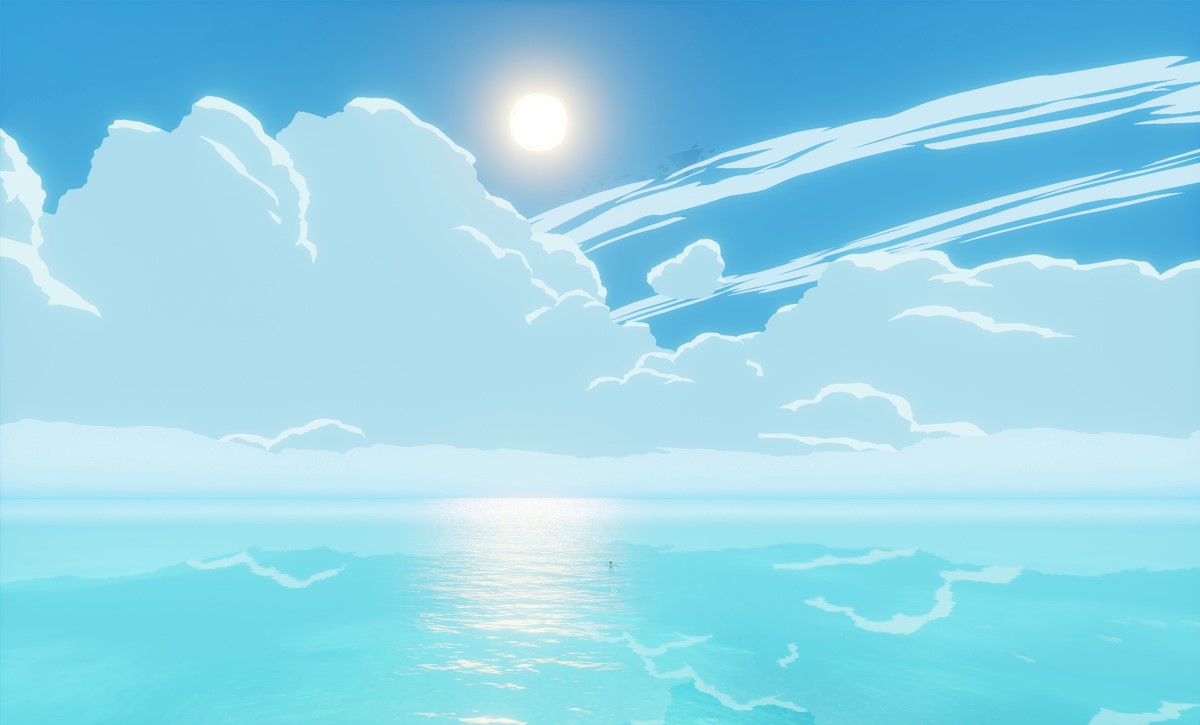 One of the first things I noticed about Abzû was that the music was absolutely soothing. However, it wasn’t sappy or contrived like some of that schlocky New Age music that I think we’ve all had the misfortune of listening to. Another thing that I soon discovered was that there were no life bars; no speed or endurance meters; and no compass points or map overlays—in short, it seemed from the outset that Abzû was not going to be (thankfully) a very hand-holdy experience.

As I glided along through the depths I also came to learn just how simple and elegant the controls were. It’s a real joy to find a game that doesn’t try to impress and overburden you with overwrought, needlessly complex controls, but rather present you with a something which becomes naturally instinctive within a short amount of time. 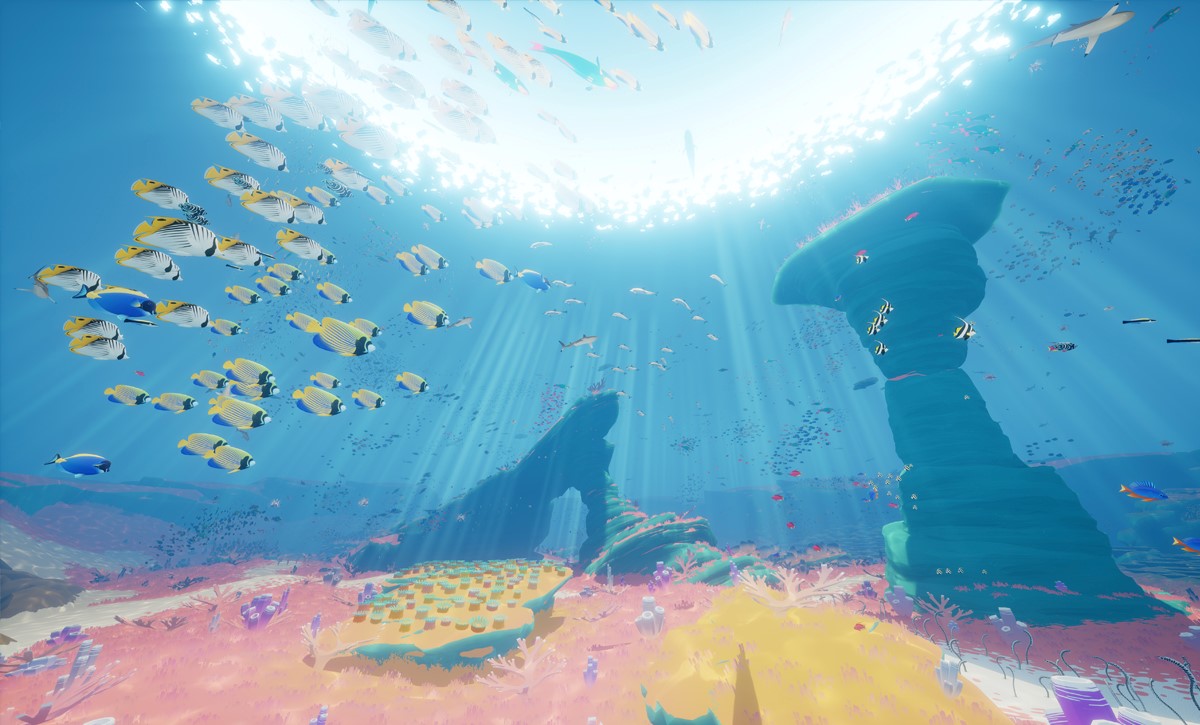 Back to my maiden voyage…as I neared the bank of what I thought was algae, I soon discovered that it was a thick cluster of kelp which was stretched out much more expansively than I’d thought from the water’s surface. The game prompted me to grab onto a nearby large grouper fish that was circling around, and it guided me into an opening embedded within the kelp. Soon, a whole new underwater world opened up to me, as various schools of fish darted this way and that and reeds of kelp and other underwater flora swirled gently in the playful currents. Ethereal rays of light sifted downwards from breaks in the massive kelp forests’ canopies, just as the music swelled to a cacophonous symphony of sublime transcendence. Needless to say, Abzû had me hooked from that point forward.

As I explored further on, somewhere in the back of my mind I knew that this experience was very primal, as I figured it would be with pretty much anyone who played it. After all, we as humans first crawled out of the water millions of years ago and so have ancient memories—distant echoes within our minds—of our first baby steps, or rather webbed foot plop-downs upon the still-developing mounds of Terra Firma. Indeed, even today, as fetuses, we all begin life within a cocoon of liquid cocoon—our mother’s wombs. But I digress…

Abzû is not only a deep dive into our collective subconscious, but a rare gaming experience that is making big waves (couldn’t help it) because of its uniqueness. In a sea (I did it again, sorry) of bombastic, hyper-violent games which try to convince gamers of their worth through tired conventions such as kill counts, yawn-inducing grinding and persistence, hackneyed and outmoded plotlines, and “look at me, look at me” gaudy and fancified graphics, Abzû stands out prominently. 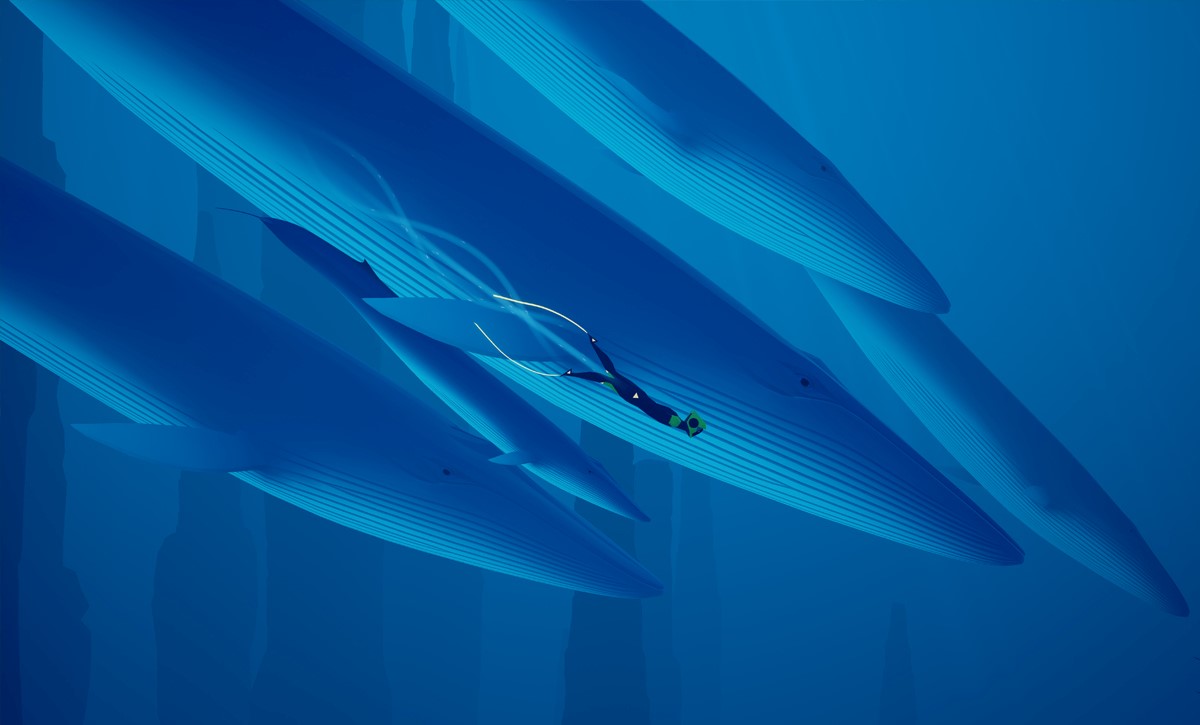 In Abzû, you play as a nameless diver who is trying to discover something within the ocean’s depths. I don’t want to reveal too much about the game’s plot, but suffice it to say that his task is not without its dangers. It’s hard to classify Abzû within a game genre or genres, since it really is genre-defying (which is a good thing), but based on its most basic components, it struck me as a game that simply is about exploration.

Although your aquatic protagonist follows a more or less linear path, you are free to explore Abzû’s numerous zones. Each of these areas are quite unique and present their own challenges and dangers. There are also small underwater wells that you can trigger with your innate sonar pulse, which in turn will each release a new species of aquatic life—from eels to small sharks and even different forms of shellfish.

To my astonishment, each time that I unlocked a new life form, I could see how each of them would interact with the others of their kind that were already within the game’s ecosystem. In other words, the bigger fish ate smaller fish, who in turn chomped on poor little tiny fishies, and so forth and so on. One of my favorite things to do was just “sit” atop one of the many large stone shark idols and calmly observe the ways of nature, naturally unfolding around me. 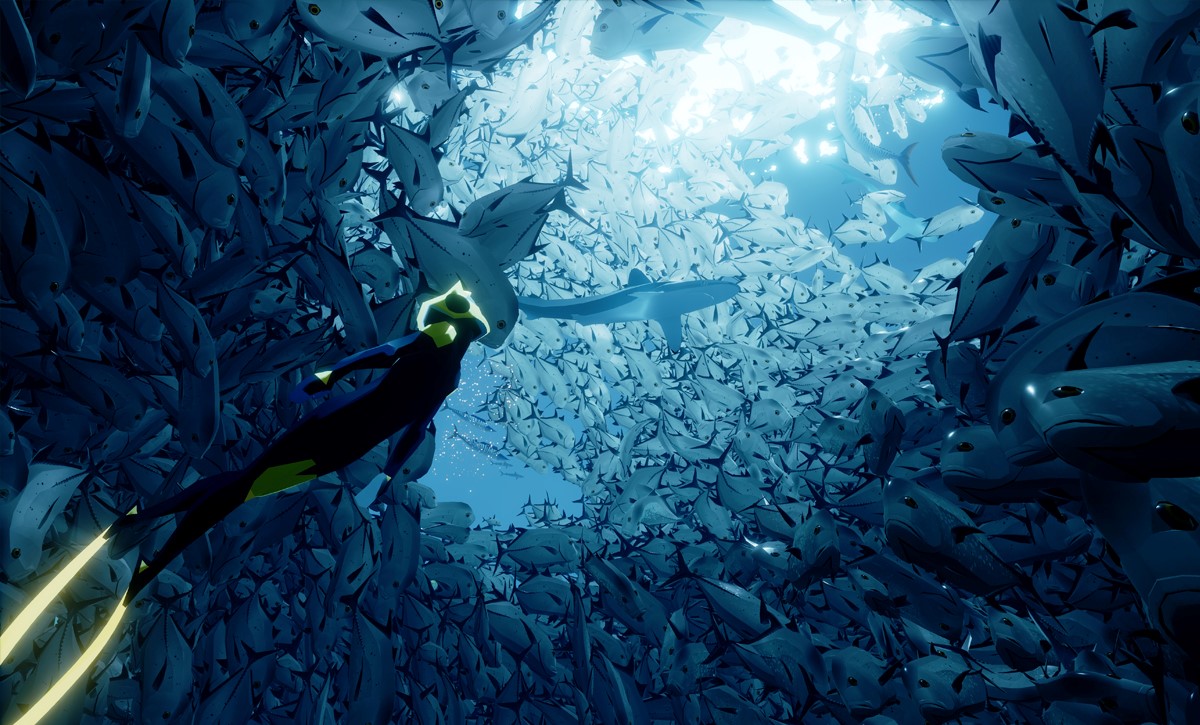 Abzû’s gameplay isn’t as aimless as it seems, and the game gently prods you in the general direction of advancement without being invasive. Some folks may be put off by Abzû’s eschewment of sign-posting, especially in this age of laziness with regards to discovery and curiosity, but here still the game excels. Even as admittedly a jaded gamer (in some aspects) as myself have become, Abzû imbued me with such a sense of wonderment and inquisitiveness, that I couldn’t help but think—what is next? As opposed to being fixated on how many kills I could rack up, or what sort of shiny new weapon I could get my blood-caked mitts on, in Abzû I simply wondered what clue I would glean from each new puzzle I was presented with.

Don’t worry, Abzû’s puzzle aren’t rage-quit inducing, in fact they are very much on the lighter side. There also isn’t anyway that you can die. These factors contribute to the fact that Abzû is a game which is experiential—it’s all about the path that leads to the goal, it’s not achieving the goal in and of itself. I found this very Zen-like approach not only good for my blood pressure, but also refreshing, and a much-needed antidote to all of the empty sound and fury that permeates throughout much of the gaming industry these days.

Visually, Abzû’ is simply stunning. You won’t see a lot of super-detailed textures here but more of what, how could I say this—the game’s scenes are similar to a series of fine paintings with just the right amounts of contrast and form. The vibrant hues and tones used throughout Abzû’s environs are breathtaking. They aren’t oversaturated as in many other games, but rather used sparingly for maximum effect. Likewise, the sounds and music are surreal and calming, with more stern notes punctuating similarly more serious encounters. 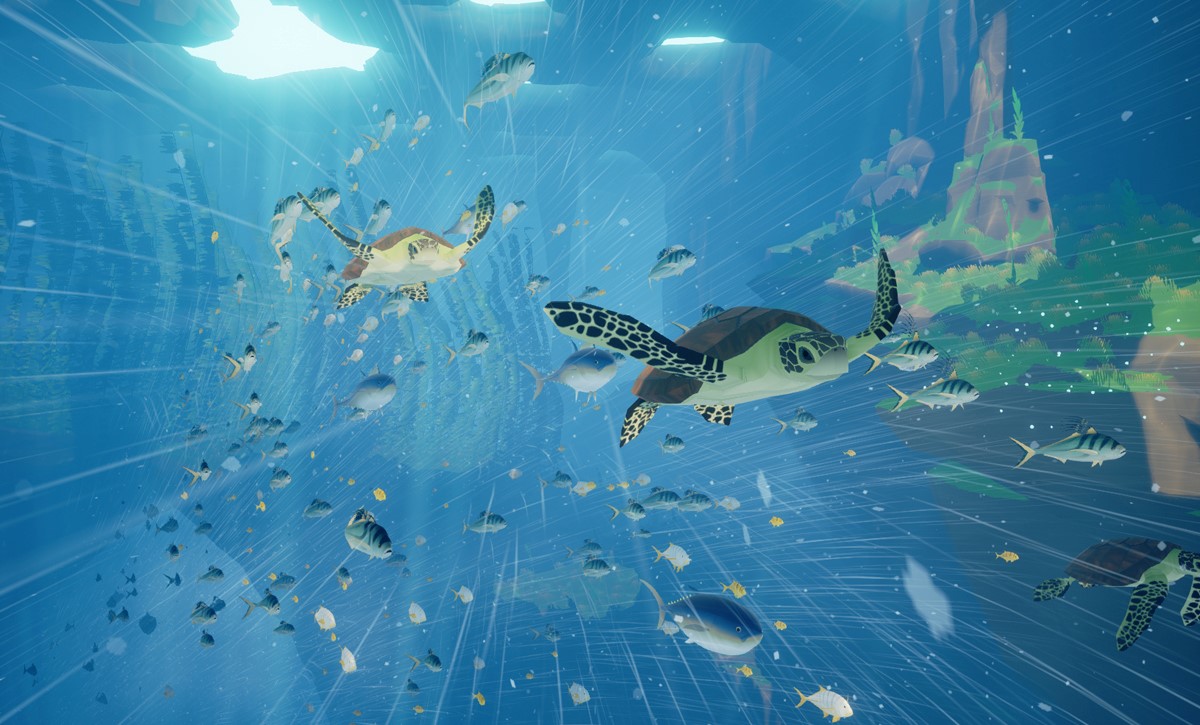 I would say that Abzû is the perfect game for showing off to your friends (preferably on a decent gaming laptop) because of its simple and elegant game mechanics, transcendent narrative, easy to grasp controls, and non-violent themes (kids watch out because your parents might want to play this too). Abzû is all that I expected it to be and much more, and I’m already getting ready for my second play through. In my mind, all of the above factors point to Abzû easily being a contender for game of the year.